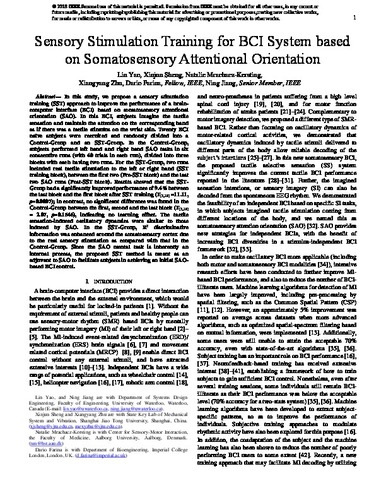 In this study, we propose a sensory stimulation training (SST) approach to improve the performance of a brain-computer interface (BCI) based on somatosensory attentional orientation (SAO). In this BCI, subjects imagine the tactile sensation and maintain the attention on the corresponding hand as if there was a tactile stimulus on the wrist skin. Twenty BCI naive subjects were recruited and randomly divided into a Control-Group and an SST-Group. In the Control-Group, subjects performed left hand and right hand SAO tasks in six consecutive runs (with 40 trials in each run), divided into three blocks with each having two runs. For the SST-Group, two runs included real tactile stimulation to the left or right hand (SST training block), between the first two (Pre-SST block) and the last two SAO runs (Post-SST block). Results showed that the SST-Group had a significantly improved performance of 9.4% between the last block and the first block after SST training (F(2,18) =11.11, p=0.0007); in contrast, no significant difference was found in the Control-Group between the first, second and the last block (F(2,18) = 2.07, p=0.1546), indicating no learning effect. The tactile sensation-induced oscillatory dynamics were similar to those induced by SAO. In the SST-Group, R2 discriminative information was enhanced around the somatosensory cortex due to the real sensory stimulation as compared with that in the Control-Group. Since the SAO mental task is inherently an internal process, the proposed SST method is meant as an adjuvant to SAO to facilitate subjects in achieving an initial SAO-based BCI control.