Politics of Fear: Unitary Bias of a Federal Design in Nepal 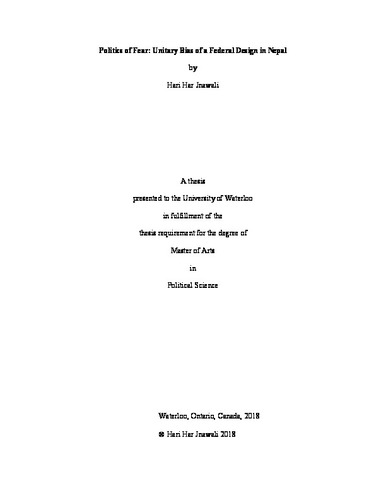 This thesis explores the reasons that have led the framers of the constitution to centralize powers in the federal government of Nepal, despite claims for accommodation by its minority groups. It contends that the centralized model is chosen to neutralize the potential risk of secession. Taking discourse analysis as its methodological approach, the thesis examines this argument in two sections. First, it develops seven measures: the recognition of minorities, the demarcation of sub-unit boundaries, the distribution of powers, the constitutional amending formula, the appointment process of the Judges in the Supreme Court, the jurisdiction of the upper house in the federal parliament, and the constitutional (a)symmetries, and applies them in the constitution. Second, it assumes that the fear of disintegration existed in the polity due to i) Maoists’ interpretation of the ‘right to self-determination’ ii) utterances of secession threats by regional leaders and, iii) the foreign intervention in the domestic politics of Nepal. In its attempt to dampen the risk of disintegration, the current arrangement of the Nepali state fails to accommodate the demands for the ‘right to self-determination’ and autonomy, further augmenting the discontent among minorities. Despite the change in the structure, the thesis concludes that the present design has not lost the fundamental character of the previous unitary state that repressed diversity and claimed to maintain the territorial integrity. In order to reach this conclusion, official discourses such as the manifestos of political parties, their debates as recorded in the CA transcripts, and the official statements of the governments have been analyzed.