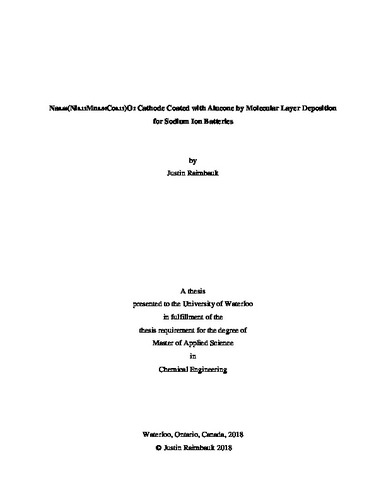 The importance of batteries has skyrocketed in the twentieth century due to an impending energy crisis arising from a dependence on fossil fuels. Global warming has alerted the world to the environmental dangers of fossil fuel reliance and has spurred the development of clean energy sources. Clean energy sources are often less predictable and controllable than fossil fuel energy and require a means of storing energy until its use is required. The spreading growth of the electric vehicle industry has also spurred much research into high-performance batteries. Thus, batteries play an integral role in our everyday lives and are required for an environmentally-conscious future. Lithium ion batteries currently dominate the portable battery industry due to their long lifetime, good capacity, and wide operating window. However, mineable sources of lithium are unsustainable in the long term and their expense, combined with the expense of the cobalt used in commercial cathodes, is a major barrier to widespread adaption of batteries for energy storage and electric vehicles. On the other hand, sodium is much more abundant and inexpensive than lithium, and its electrochemical behaviours are very similar to those of lithium. Thus, much time and effort are being invested into developing sodium ion batteries (SIBs) to replace lithium ion batteries. One problem with many sodium ion battery cathodes is their instability at high voltages. These cathode materials undergo a phase change above 4.3 V which limits their energy density. To solve this problem, a coating can be applied to the cathode particles which prevents side reactions with the electrolyte, dissolution of active materials, and breakdown due to volume changes. Several coating methods could be used to accomplish this, but only atomic/molecular layer deposition can create the ultrathin, homogeneous, and defect-free coatings necessary for high performance SIBs. This thesis work investigates the effect of coating alucone, an alumina containing ethane linkers, deposited by molecular layer deposition on the SIB cathode Na0.66(Ni0.13Mn0.54Co0.13)O2 (NaNMC). This work also details the optimization of the NaNMC cathode with regards to annealing temperature and chelating agent addition. The research described in this thesis shows that an annealing temperature of 850 °C produced the purest crystal structure as observed from XRD and by testing its electrochemical performance. The addition of a chelating agent stabilized the metal ions in solution during synthesis and decreased the agglomeration of the particles after annealing. Specifically, the addition of citric aid resulted in the highest capacity and rate performance when the synthesized cathode material was fabricated into a coin cell, compared to other chelating agents tested. After the optimization of the cathode material was completed, 5, 10, or 20 layers of alucone were coated onto assembled cathodes and their performance at a higher voltage of 4.5 V was compared to a pristine cathode of the same material. The cathodes with 10 and 20 layers of alucone had similar capacities to the pristine sample after 100 cycles of charge/discharge, but the sample with 5 layers of alucone had 20 mA h g-1 (27%) more capacity than the pristine sample after 100 cycles. All coated samples had much better rate performances than the pristine sample, especially at 5 C and 10 C, and the 5-layer sample again outperformed all others. Electrochemical impedance spectroscopy revealed that the 5-layer sample had the lowest internal resistance which explains its superior rate performance. It also revealed that after 100 charge/discharge cycles up to 4.5 V, the 5-layer sample’s resistance remained unchanged while the pristine sample’s internal resistance more than doubled, indicating the alucone coating’s excellent ability to stabilize the cathode at high voltages. The increased capacity and rate performance of the 5-layer sample also demonstrates its effectiveness at stabilizing the NaNMC cathode by preventing dissolution into the electrolyte, side reactions, and particle breakdown due to volume changes. This work presents a simple method for increasing a cathode’s cycle life and rate performance by depositing alucone using molecular layer deposition. While the alucone coating presented here was applied to an NaNMC cathode material it could likely find applications with other types of electrode materials.