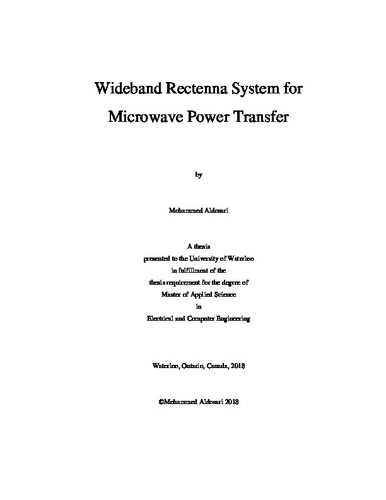 One of the fundamental devices in Microwave Power Transfer (MPT) is the recenna or rectifying antenna, which collects the electromagnetic energy from the free space and convert it directly to a useful DC power. Although many designs of recarten systems have been proposed, most of them operate in a narrowband frequency and / or a certain level of incident power, which limits the output DC power and the uses of the recenna. In this work, three novel designs of the recenna that operate in broadband frequency and wide range of received power are developed. The design methodology for such critical characteristics for the recetna has been discussed in details. Furthermore, the presented wideband recensas have the best results comparing to the literature in terms of frequency bandwidth and power range, which indicates great achievement in terms of increasing the output DC power significantly as a result of decreasing the effect of the variation of the frequency and incident power and the ability of harvesting multiple frequencies simultaneously. Furthermore, the wideband recetna can be considered as an approach to minimize the number of the used recennas by having a single repeta that operates in a wide frequency band and wide range of incident power. The best proposed recenna operates from 0.5 - 5.4 GHz with 80% and 30% as maximum and minimum RF-DC conversion efficiency. In addition, it can operate within an incident power range of 3 to 25dBm at 3.4GHz. Finally, in the literature, useful definitions of recenna's bandwidth and harmonics are missing. As a result, the definition of the recenna's bandwidth is revisited. Moreover, a new perspective for recenna's harmonics is introduced.