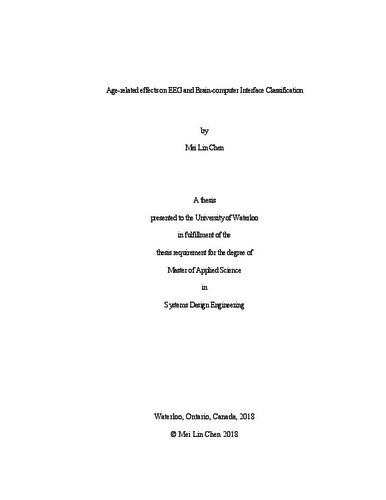 There is a rapid increase in the number of older adults around the world. This directly translates to an increase in the number of people living with health complications that are more prevalent in the elderly population, such as post-stroke conditions. Current rehabilitation techniques for stroke and other disorders are limited in effectiveness, which calls for the development of new approaches such as brain-computer interface (BCI) applications in neurorehabilitation. The majority of BCI applications are based on electroencephalogram (EEG) and other physiological signals to detect user intention and provide feedback. However, many of the signal processing algorithms currently used have been developed on data from a much younger population. There is a need to investigate how age-related changes directly affect EEG signals and extend to BCI control, specifically for older adults. In this thesis research, EEG response to vibro-tactile stimulation from 11 younger adults (21.7±2.76 years old) and 11 older adults (72.0±8.07 years old) were investigated. The results showed that, firstly, the spatial pattern of the cortical activation in older subjects was significantly different from that in younger adults (older adults had a reduced lateralization in activation); and secondly, there is a general overall power reduction in the EEG from older adults compared to younger adults. This suggests that the approach for designing BCI applications for older adults must be fundamentally differently than that for younger adults. This need is further shown in the average BCI performance accuracy classifying left vs. right was 64.5±7.75% for the older adults, which was more than 20% lower and statistically different (t(20)= -4.3, p <0.001) than that in the younger subjects, which was 85.3±14.1%. Compared to current works in the field, this research is unique in its examination of age-related differences in EEG signals and is the only work we are aware of that examines the age-related differences in EEG response to vibro-tactile stimulation. This finding should be further investigated with other BCI paradigms such as motor imagery in order to confirm the impact of age on BCI control. Further, provided that this age-related difference persists across different modalities, it is then necessary to fine-tune the algorithmic approaches to fit the intended application to the target population.