Development of Flexible Lithium Sulfur Batteries Based on Laser-Induced Graphene 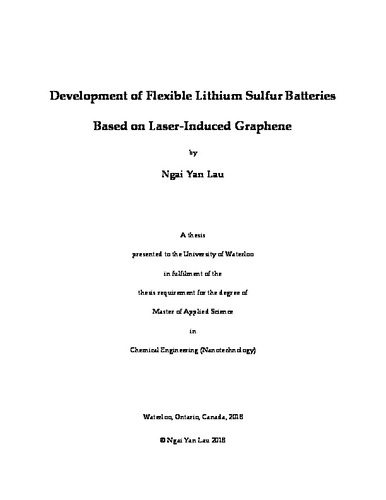 Emerging technologies have become increasingly advanced with flexible components and are integrated into various interfaces, finding themselves in applications such as rollable displays, wearable technologies and e-textiles. As a result, there is a need for a fully flexible battery with higher energy storage capacity that is simple to fabricate while being cost effective. While most commercially available flexible and thin-film batteries are formed through microfabrication techniques and other high capital cost methods, there is a need to explore higher energy density chemistries and determine a more cost-effective route to fabricating such batteries for the mass production and wide-spread use of flexible batteries. The work in this thesis focused on the adaptation of a recently reported laser-scribing method to produce interdigitated electrodes from laser-induced graphene (LIG) towards the development of flexible lithium-sulfur (LiS) batteries. A proof of concept was demonstrated for this graphene material through sequentially patterning and depositing the active materials, sulfur and lithium, into the LIG fingers. A novel technique to introduce sulfur into carbon-based fingers was presented by the heterogeneous nucleation of sulfur crystals followed by their melting to wet the graphene and uniformly distribute within the porous network formed. In order introduce a dense lithium metal anode onto the porous substrate, silver nanoparticles were used as seeds for electrodeposition and a reverse pulse plating (RPP) technique was also utilized to reduce the lithium protrusions that would eventually form dendrites and high irreversible capacity loss due to the high surface area for solid electrolyte interface (SEI) formation. Initial cycling displayed energy densities that exceeded lithium-ion microbatteries and thin-film batteries fabricated through microfabrication at almost 200 mWh/cm3. However, the obtainable discharge capacities faded at the second cycle, suggesting a significant irreversible source of capacity loss. It was then determined the source to be a likely unstable solid electrolyte interphase (SEI) at the anode of the battery. Additionally, there was the finding of a prominent presence of macropores within the electrodes leading to an agglomeration of insulating sulfur within the pores that cannot be utilized in cycling. The combination of two of the major conclusions from the initial proof of concept propelled the investigations of improving the defectiveness of the LIG and control over the LIG structure as well as Li plating efficiency on various carbons in different electrolytes. From the studies on LIG structure control, it was found that a lower power led to a reduced flux of gas evolution during a reduced local temperature induction upon laser irradiation. Thus, the formed electrodes are typically more dense, possessing a higher surface area with a reduced volume. Although the electrodes become less conductive with a reduced power, the conductivity can be improved, and the graphene annealed through several laser passes or the defocusing of the laser beam. In the Li plating study, ether-based electrolytes were found to be detrimental to the cycling of plated lithium on the carbon electrodes, regardless of whether it was on a hard carbon with more sp3 regions or a soft carbon with mainly sp2 regions. This is because of solvent co-intercalation during lithium insertion and also the unstable SEI formed. Graphite, the soft carbon, performs best as a Li plating substrate in a carbonate-based electrolyte with a LiTFSI salt, while carbonized poly(furfuryl alcohol) (CPFA), a hard carbon, performs best in a carbonate-based electrolyte with a LiClO4. While further research is needed to understand how to control the carbonization of the PI to achieve a level of “hardness” or “softness” in the carbon, the results presented in this work contribute to the understanding of the novel LIG material in addition to the field of lithium electroplating onto substrates for the reduction of excess lithium use. Finally, the successful demonstration of a proof of concept of LiS batteries from LIG in an open architecture makes it possible for a number of future in operando analyses and characterizations of the LiS battery chemistry towards their commercialization.