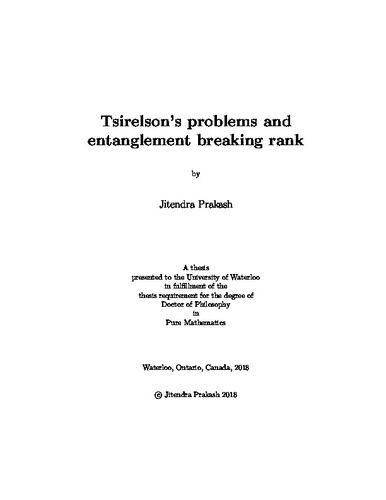 There are two main themes of this thesis. In the first part, we study the various sets of correlations arising in the study of non-local games and Tsirelson's problems. In the second part we introduce the notion of entanglement breaking rank and study its connection with the SIC POVM existence problem. Tsirelson's problems have been open for quite some time and continue to be an active area of research. These problems seek to identify relationships between different sets of quantum correlations arising from different quantum models and their relaxations. One of the goals of this thesis is to show that the set of correlations arising from the tensor product model is not topologically closed, and hence is distinct from the set of correlations arising from the commuting tensor model. We begin our investigation in Chapter 3 by working through an example of a non-local game with three inputs and binary outputs. While this toy example does not help in showing the distinction between the aforementioned sets of correlations, it still provides valuable insights and motivation for a more abstract approach which we take up in the next chapter and which turns out to be fruitful. In Chapter 4, we observe that given a graph we can associate functions (of a real variable) corresponding to different correlation sets. We study the properties of these functions. We show that for the complete graph on five vertices, the assumption that the correlation set obtained through tensor model is closed forces its corresponding function to be piecewise linear on an interval, while the function corresponding to the commuting model is not. This shows that the quantum correlation set is not closed hence solving one of Tsirelson's problem and also improves the results of Slofstra by reducing the number of experiments and outcomes to five and two, respectively. Finally, for the second part of the thesis, we introduce the notion of entanglement breaking rank of an entanglement breaking channel. While technically this notion is not new, this point of view helps us in showing that the entanglement breaking rank of a particular channel on $\mathbb{M}_d$ being $d^2$ is equivalent to the existence of a SIC POVM in dimension $d$. This opens up another approach to tackle this existence problem.