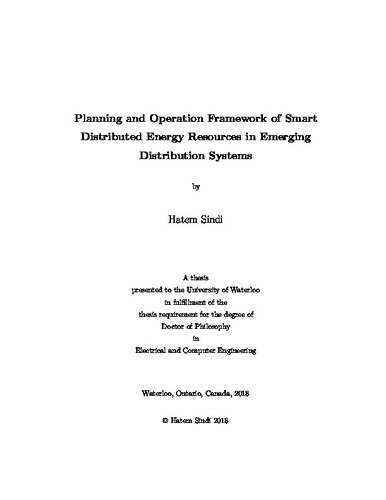 Smart grid technologies provoke a major paradigm shift in how power systems are planned and operated. The transition to a smarter system is happening gradually; however, researchers has reported that this transition is dealt with generally in a "react and provide" manner. Proper planning studies allow for this transition to be done in a predict and provide" fashion. Part of planning this transition is envisioning the future system. Technical, social, environmental, and economical challenges are foreseen and tackled in the literature; however, no generalized planning framework that addresses the overall picture of different involved parties' interests and their anticipated (and often conflicting) interactions to properly plan for a better and fair outcome has been developed. This work addresses the issue in several steps: 1) it provides a backbone framework architecture for asset sizing and allocation in the future Smart Distribution System (SDS), 2) it considers the daily optimal operation of these assets in the long-term planning problem, and 3) it considers the potential conflicts that happen on the long-term planning level and operational levels. This architecture requires the development of a framework capable of absorbing private investments, integrating new technologies, promoting smart grid applications, and yet remaining feasible to all involved parties. Strategic analysis of the involvement of each stakeholder has been conducted. Proceeding from this analysis, deductions and conclusions about venues for promoting and allowing a smoother transition to the new paradigm are drawn. In addition, this analysis highlighted potential conflicts that are showcased in two different case studies. Potential ways in which the conditions affect the planning procedure and how they can be overcome are proposed. The recommendations can be highlighted as follows: 1) promoting new smart grid technologies, 2) encouraging communications and cooperation between involved parties, 3) considering daily optimal operation of assets to fully take advantage of their new active nature to better allocate them in the long-term planning problem, and 4) consideration of stakeholders interests in the planning phase in order to better absorb investments and move to the new paradigm. To size and allocate assets in the long-term planning problem for the SDS, first a building algorithm has been developed to size and allocate DG units. This algorithm breaks the problem into two subproblems to overcome the modeling and computational challenges of the mixed-integer nonlinear programming problem. The first subproblem is addressed using heuristic optimization techniques, namely a genetic algorithm, and the second involving deterministic analytical means of nonlinear optimization, utilizing the advancements made in branch-and-bound methods providing a proven global optimal solution to non-convex problems. Considering the daily optimal operation and both electric utilities' and investors' objectives, the planning problem has been developed. The results show greater private investments absorption, reduced costs to both parties, and higher system performance due to lowered energy losses. The expected increased numbers of customers opting to become resilient and have a more reliable service pose several operational and planning challenges. In this work, a novel consensus-based algorithm is introduced as an economically efficient tool for coordinating prosumers' interactions, within the feasible solution region. Several objectives are targeted in this work, among which the global economic benefit maximization of all interacting prosumers is the most salient. This economic benefit comprises the total cooperative payoff of the interacting prosumers. Each prosumer has its own private bounds defining the range of power production and consumption. A novel definition is proposed for prosumers' interaction in the hybrid microgrids. The developed scheme's importance stems from the dramatic change in the smart networks' paradigms. In addition, the individual prosumers' preferences are recognized via the comprehensive mathematical modeling for the evolved AC/DC network. The results are provided for a basic two-prosumer scenario. However, these results highlight the potential of the proposed approach in a practical system setting. More sophisticated case studies, i.e., multi-power levels, multi-prosumers, and different system topologies, could be also studied using the proposed work.