The Impact of Culture on Relationship Repair in Negotiation. 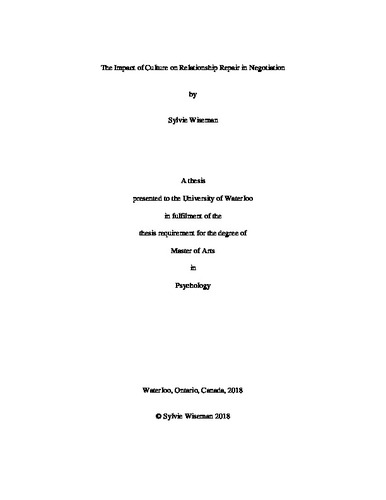 Negotiation is an emotionally charged process, in which relationship rupture can occur. While past research has focused on predictors of relationship rupture in negotiation, there has been a dearth of research focusing on effective relationship restoration behaviour following a rupture to the relationship. When relationship rupture occurs, relationship restoration is imperative for successful negotiation outcomes, however, cultural variations in communication can create barriers for effective restoration. This research examined how culture influences the effectiveness of two types of relationship repair strategies - direct and third-party apologies. We proposed that cultural differences in apology preferences may be due to variations in context dependence, a communication norm which guides the degree to which individuals attend to or rely on contextual cues in communication. We hypothesized that an apology recipient’s cultural background (Caucasian North American vs. Chinese) would moderate the relationship between type of apology and restoration, such that restoration would be most effective when the type of apology used to restore a relationship aligns with culturally-congruent context dependence norms (low for Caucasians vs. high for East Asians). Results from our study indicate partial support of our prediction, as Caucasian North Americans perceived culturally-congruent, direct apologies as more effective for restoring ruptured negotiator relationships compared to culturally-incongruent, third-party apologies.