Option Effectiveness in the Graph Model for Conflict Resolution 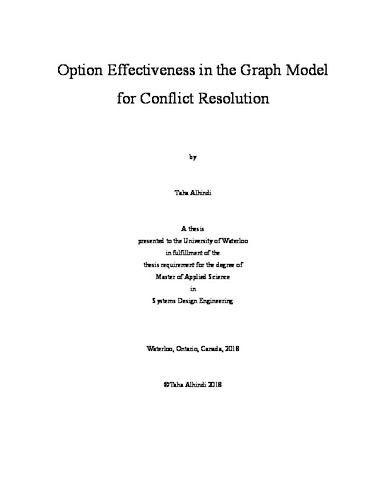 The Graph Model for Conflict Resolution (GMCR) is expanded by designing a novel approach for the evaluation of the effectiveness of actions or options controlled by the decision makers (DMs) in a dispute with respect to the potential resolutions or equilibria. This new procedure, called Option Effectiveness, determines the relative importance of each option based on its selection within each resolution contained in the set of equilibria, as well as the types of solution concepts, or behavior under conflict, that form the equilibria. The solution concepts, or stability definitions, used in this method consist of Nash, Sequential Stability (SEQ), Symmetric Metarationality (SMR), and General Metarationality (GMR). More specifically, the strength of an equilibrium type from strongest to weakest is Nash, SEQ, SMR, and GMR. Based on this, the effectiveness or impact of a given option is calculated according to its presence in an equilibrium. This permits the options to be ranked according to their importance or effectiveness in resolving the dispute under consideration. By better understanding which options are crucial, a given DM can focus his effort on choosing strategies which will have a bigger impact on what occurs as the conflict evolves over time to a final resolution. The Option Effectiveness approach was tested and refined by applying it to four different real-world conflicts. In particular, the ongoing trade dispute between the United States (US) and China over a number of different trade agreements and financial institutions is modeled and analyzed at three points in time using the GMCR methodology in combination with the Option Effectiveness advancement given in this thesis. In fact, it was this particular conflict which motivated the author to develop the Option Effectiveness approach. This trade dispute is divided into three phases in time. The first phase starts when China leads the initiative to establish the Asian Infrastructure Investment Bank (AIIB) and the US considers levying countermeasures. The second phase is when the US attempts to launch the Trans Pacific Partnership (TPP) agreement and offers China terms regarding the AIIB. In the case of China accepting the US conditions, the US will withdraw its opposition to the AIIB and announce a truce over it. The third phase is subsequent to the inauguration of Mr. Donald Trump as the President of the US in early 2017 and his withdrawal of the US from the TPP while China considers the launching of the Regional Comprehensive Economic Partnership (RCEP) trade agreement. The Option Effectiveness approach is further illustrated by applying it to three other conflicts: the Cuban Missile Crisis of 1962 and two environmental conflicts called the Elmira Groundwater Contamination conflict and the Garrison Diversion Unit irrigation dispute. The insights revealed by applying the Option Effectiveness approach to these conflicts, confirm the advantages of utilizing the Option Effectiveness method in conflict analysis.