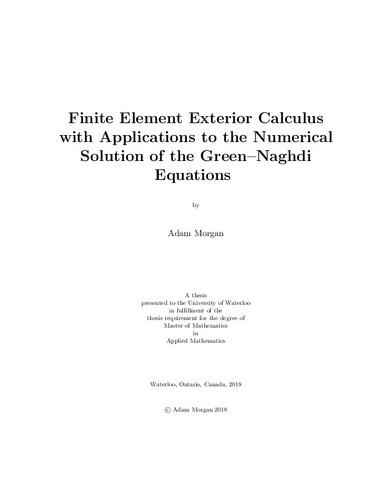 The study of finite element methods for the numerical solution of differential equations is one of the gems of modern mathematics, boasting rigorous analytical foundations as well as unambiguously useful scientific applications. Over the past twenty years, several researchers in scientific computing have realized that concepts from homological algebra and differential topology play a vital role in the theory of finite element methods. Finite element exterior calculus is a theoretical framework created to clarify some of the relationships between finite elements, algebra, geometry, and topology. The goal of this thesis is to provide an introduction to the theory of finite element exterior calculus, and to illustrate some applications of this theory to the design of mixed finite element methods for problems in geophysical fluid dynamics. The presentation is divided into two parts. Part 1 is intended to serve as a self–contained introduction to finite element exterior calculus, with particular emphasis on its topological aspects. Starting from the basics of calculus on manifolds, I go on to describe Sobolev spaces of differential forms and the general theory of Hilbert complexes. Then, I explain how the notion of cohomology connects Hilbert complexes to topology. From there, I discuss the construction of finite element spaces and the proof that special choices of finite element spaces can be used to ensure that the cohomological properties of a particular problem are preserved during discretization. In Part 2, finite element exterior calculus is applied to derive mixed finite element methods for the Green–Naghdi equations (GN). The GN extend the more well–known shallow water equations to the regime of non–infinitesimal aspect ratio, thus allowing for some non–hydrostatic effects. I prove that, using the mixed formulation of the linearized GN, approximations of balanced flows remain steady. Additionally, one of the finite element methods presented for the fully nonlinear GN provably conserves mass, vorticity, and energy at the semi–discrete level. Several computational test cases are presented to assess the practical performance of the numerical methods, including a collision between solitary waves, the motion of solitary waves over variable bottom topography, and the breakdown of an unstable balanced state.