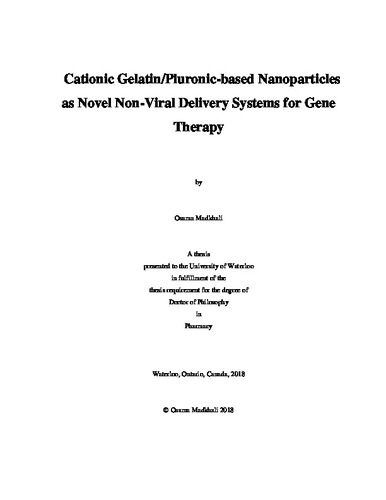 A delivery system is essential to protect the DNA from degradation because of the extracellular and intracellular barriers. Two main types of delivery systems have been used to deliver genes into the body: viral and non-viral vectors. Although viral vectors are still superior over non-viral vectors, non-viral types are a better and safer alternative due to the safety concern of viral vectors. The low transfection efficiency of non-viral vectors remains a challenge due to the barriers that must be tackled. An effective non-viral vector must fulfill many conditions in order to be able to handle these barriers. The vector should be biocompatible, biodegradable, able to interact with DNA and cell membrane, able to successfully escape the endosome, and finally, capable of entering the nucleus to express the required protein. Cationic polymers are one of the most effective non-viral delivery systems. Cationic polymer/DNA (also called polyplexes) are able to interact with the DNA through electrostatic interaction, which results in DNA complexation and condensation. Gelatin is a natural polymer that can be easily modified by increasing the positive charge to effectively interact with the DNA and the cell membrane. In this project, gelatin nanoparticles were prepared using the two-step desolvation method, and were modified with cholamine as a cationic agent. Pluronic block copolymers were subsequently added to protect the cationic gelatin/DNA from degradation, and to increase the circulation time. The interactions of gelatin/Pluronic/DNA with the model membranes DPPC-CHOL and POPC-CHOL were studied using Langmuir’s monolayer study, as well as Brewster’s angle microscopy at the air/water interface. Transfection efficiency and cell viability were then evaluated at COS-7 cells. The results revealed that gelatin nanoparticles were successfully modified, at which point the positive charge increased from +11 to +32. Additionally, cationic gelatin (CG) was able to interact with and neutralize the negative charge of the DNA. CG/Pluronic/DNA complexes was characterized by size and zeta potential, showing a small particle size and a positive charge. The interaction of CG/Pluronic/DNA complex with the model membranes demonstrated a fluidization effect, especially with CG and Pluronics, whereas DNA showed an ineffective and negligible condensation effect. With respect to transfection efficiency, CG results were poor compared to positive control jetPEI®, with no improvement after adding Pluronics. Gemini surfactant (GS) was also used in the transfection experiments in hope that it might improve the transfection efficiency of cationic gelatin. However, CG/GS showed some aggregation, and the positive charge decreased by increasing the CG, which resulted in lower transfection efficiency. Cell viability of the cells containing cationic gelatin was very high (similar to non-treated cells), which was confirmed by the safety of the gelatin, even after modification. More investigational studies and optimizations are required to understand the low transfection efficiency of cationic gelatin. These studies will help design more effective delivery vectors, either with gelatin or with any other non-viral system.