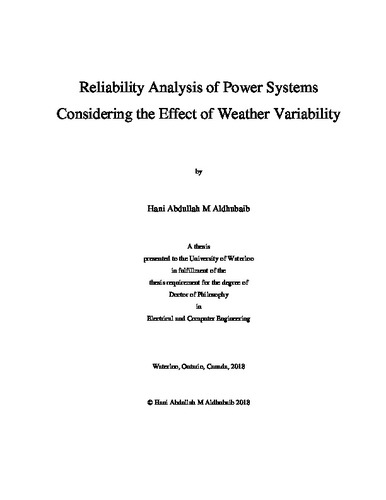 The continuity of power supply is affected by numerous factors, one of which is related to the weather conditions to which power system components are exposed. Bad weather conditions have been noticed to be one of the major causes of failure for power system components. Moreover, the severity of weather conditions plays a considerable role in the determination of both commencement and duration of repair activity for failed components. Thus, the effect of weather on both component failure behaviour and repair process imperatively necessitates highlighting that effect on the reliability analysis and the developing of weather-based reliability assessment methodologies in order to help mitigate any associated risks in the short- and long-terms. As a result, this thesis proposes a new weather-based reliability philosophy that is primarily concerned with studying the effect of weather on power system reliability through the introduction of a new reliability analysis approach called forecasted power system reliability analysis approach (FOPRA). Unlike the conventional reliability indices that are considered statistical quantities, reliability indices developed by the proposed FOPRA approach reflect the actual performance of the system. The FOPRA approach is comprised of two main concepts: 1) weather-based predictive reliability assessment method (PRAM); and 2) weather-based decision-making repair model (DMARM). The application of FOPRA approach on distribution systems is discussed in this thesis. The PRAM method aims to develop a new weather-based methodology for predicting the performance of a distribution system in a short-term future study period by considering the effects of the weather. The methodology takes many factors into account, most important of which are historical weather-based performance of the system and possible future changes in weather patterns that may occur in a different manner from that of the past. Conventional component reliability indices, failure rate and repair time, are modified to represent the actual variations in component behaviour. A set of analytical equations and Monte Carlo Simulation algorithms are introduced. The DMARM model, on the other hand, aims to develop a new methodical weather-based decision-making repair model for distribution system components. The proposed model investigates from a financial point of view the reliability improvement due to the reduction of the outage duration resulting from performing repair activities during bad weather for potential weather-related failures and then assigns repair tasks accordingly. The investigation process entails developing an optimization problem to define the most cost-effective repair decision, where the genetic algorithm (GA) is utilized. The proposed FOPRA approach is numerically illustrated using a typical distribution system. The results obtained demonstrate the significance of evaluating reliability indices and assigning repair activities according to the methodologies introduced in this thesis on the power system behaviour during bad weather conditions.