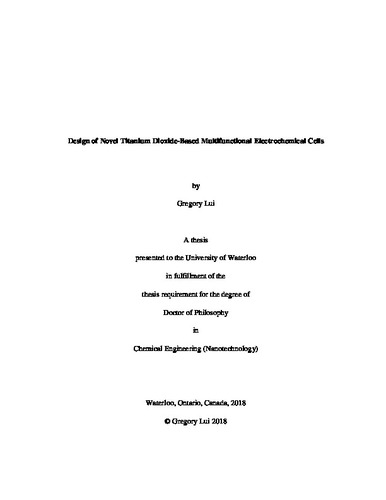 Increasing energy demands as well as the depletion of traditional resources has led to the development and improvement of energy conversion and storage technologies. Today, two major concerns are development of renewable sources of energy and establishing reliable sources of potable water to the meet continually growing demands of our society. One technology that has the potential to address both of these issues is the photocatalyst: a material that is able to use natural light irradiation to drive useful chemical reactions and create electrical power. Photocatalytic materials have already been commercially demonstrated to purify waste water and air pollution under ultraviolet irradiation. However, in a photoelectrochemical cell, photocatalytic applications extended beyond waste water remediation to the production of electricity and alternative fuels such as hydrogen gas. This thesis aims to explore the potential multifunctionality of TiO₂ materials and point to applications that extend beyond traditional photocatalysis. Specifically, this work covers the study and design of titanium oxide (TiO₂)-based multifunctional electrochemical cells that can simultaneously purify waste water and provide energy in the form of electrical power. First, this thesis explored potential applications for three-dimensional macroporous (3DOM) TiO₂ morphologies for electrochemical applications. Although the material was a suitable photocatalyst it was found to be an effective freestanding TiO₂ anode on carbon cloth for Li-ion battery applications. The 3DOM TiO₂-based anode provided a flexible, free-standing, binder-free, active material with superior power density when compared to other electrode materials in a similar configuration. This work also provided the first instance of the successful application of 3DOM materials on non-planar surfaces. Commercial TiO₂ (P25) was also employed as a photoanode in a flexible photocatalytic fuel cell as a proof-of-concept device that generates electrical power from the photo-degradation of waste sources such as human sweat (as a wearable device) and dye waste (as a flexible water treatment device). This work established the potential application of photocatalysis in wearable technologies and in flexible photocatalytic devices in general. Finally, a burr-like Ag-TiO₂ photocatalyst was developed as a photoanode material in a flow-photocatalytic fuel cell for the continuous power generation and photo-degradation of brewery effluent under solar-simulated light. This work explored the effect of Ag loading on photoelectrochemical performance, and demonstrated unprecedented power density of a flow-photocatalytic fuel cell in a continuous flow configuration.