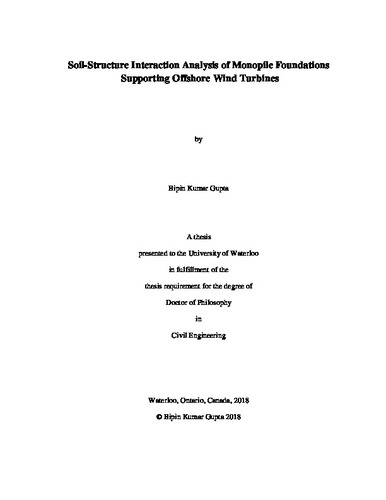 Monopile foundations supporting offshore wind turbines are hollow circular steel piles of diameter 4-6 m and a slenderness ratio (length/radius) of 10-12 driven into the seabed in an average water depth of 35 m. They are subjected to large lateral forces and overturning moments at the seabed level from wind, waves, and water currents acting on the wind turbine structure. Currently, they are designed using the p-y analysis method (p is the soil reaction force per unit length at any point along the pile shaft and y is the corresponding pile displacement at that point) which has a number of shortcomings. The p-y analysis was originally developed from a few full-scale field pile-load tests on small-diameter piles (less than 2 m in diameter) and their applicability to large-diameter monopiles is questionable. Besides, it is empirical, site-specific, and does not account for the three-dimensional pile-soil interaction important for large-diameter monopiles, thereby, resulting in a conservative design and an increase in the cost of the project. Three-dimensional finite element analysis can be used for the analysis and design of monopiles, but such analyses require significantly large computational time and effort besides, the specific expertise of finite element software that further limits its use in practice. The primary objective of this thesis is to develop a computationally efficient continuum-based mathematical model that takes the three-dimensional monopile-soil interaction into account. In the thesis, three tasks are performed towards the development of the mathematical model. First, a mathematical framework is developed to analyze laterally loaded monopiles following the Timoshenko beam theory in a multilayered elastic soil deposit subjected to static lateral loading. In the analysis, it is shown that successive simplification of the analysis can lead to monopiles modeled as a Euler-Bernoulli and rigid beam. The analysis is verified with finite element solutions and the suitability of the application each of the beam theories to obtain monopile response (head-displacement and rotation) is also investigated besides, a comparison of the computational time between the present analysis and finite element analysis is also shown. In the second task, the aforementioned framework is extended to analyze monopiles embedded in a multilayered linear viscoelastic soil deposit with frequency-independent hysteretic material damping subjected to harmonic dynamic lateral loading. It is shown that the analysis can be reduced to model monopiles following the Rayleigh, Euler-Bernoulli, and rigid beam theory. The analysis is verified with well-established solution techniques reported in the literature. Further, the results and the computational time obtained from this analysis are compared with those of the analysis in the first task for four different monopiles with varying slenderness ratio currently installed in the field. The purpose of the comparison is to investigate the applicability of the dynamic analysis for obtaining monopile response which is subjected to cyclic loadings of frequency less than 1.0 Hz. It is found that the static analysis following the Euler-Bernoulli beam theory is sufficient for obtaining monopile response. In the third task, the mathematical framework developed in the first task is extended to analyze laterally loaded monopiles modeled as a Euler-Bernoulli beam in a multilayered nonlinear elastic soil deposit and subjected to static loading. In the analysis, the nonlinear elastic relationships describing the variation of shear modulus with shear strain reported in the literature either applicable to undrained clays or sandy soil deposits are utilized. The mathematical accuracy of the analysis is verified by comparing results obtained from the analysis with the results of finite element analysis. A comparison of the computational time between the present and finite element analysis is also shown to demonstrate the computational efficiency of the present analysis. The results of the analysis are further validated with the results of several full-scale field pile-load tests and the p-y analysis procedure available in the literature. The accuracy of the results from this nonlinear elastic approach is further ensured by comparing monopile response with those of finite element simulations where the soil is modeled using an elastic-plastic constitutive model. A comparison of the monopile response is also shown in the p-y analysis to investigate the appropriateness of the currently used p-y curves to analyze and design monopiles. Finally, a preliminary step-by-step design procedure for monopile foundations embedded in nonlinear elastic soil deposit is developed following the recommendations outlined in current codes of practice for offshore wind turbines.