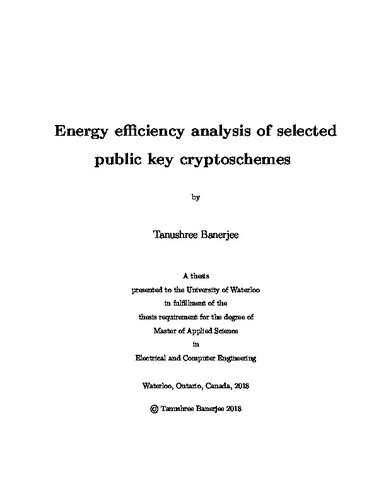 Public key cryptosystems in both classical and post-quantum settings usually involve a lot of computations. The amount as well as the type of computations involved vary among these cryptosystems. As a result, when the computations are performed on processors or devices, they can lead to a wide range of energy consumption. Since a lot of devices implementing these cryptosystems might have a limited source of power or energy, energy consumption by such schemes is an important aspect to be considered. The Diffie-Hellman key exchange is one of the most commonly used technique in the classical setting of public key cryptographic shceme, and elliptic curve based Diffie-Hellman (ECDH) has been in existence for more than three decades. An elliptic curve based post-quantum version of Diffie-Hellman, called supersingular isogeny based Diffie-Hellman (SIDH) was developed in 2011. For computations involved in ECDH and SIDH, elliptic curve points can be represented in various coordinate systems. In this thesis, a comparative analysis of energy consumption is carried out for the affine and projective coordinate based elliptic curve point addition and doubling used in ECDH and SIDH. We also compare the energy consumption of the entire ECDH and SIDH schemes. SIDH is one of the more than sixty algorithms currently being considered by NIST to develop and standardize quantum-resistant public key cryptographic algorithms. In this thesis, we use a holistic approach to provide a comprehensive report on the energy consumption and power usage of the candidate algorithms executed on a 64-bit processor.