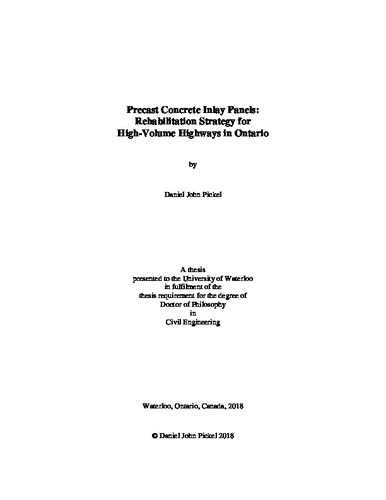 The Ministry of Transportation of Ontario (MTO) has responsibility for many high-volume highways throughout the province of Ontario, including the 400-series highways. Several of these highways have exhibited a premature rutting failure three to seven years after the placement of new hot-mix asphalt (HMA) in the pavement surface layers. This failure indicates the presence of deep-seated pavement issues that are likely located in the base layers or subgrade beneath the HMA pavement layers. To address these deep-seated issues directly, a full-depth pavement rehabilitation is required wherein the pavement structure is fully removed to the depth of the problematic layer. This type of rehabilitation is time-consuming, particularly when these issues extend for substantial lengths of the given highway. The time-consuming nature of full-depth pavement rehabilitation precludes it from use on the 400-series highways due to the MTO’s practice of limiting construction windows to the time between 10 pm and 6 am. Outside of this time, traffic must be reinstated to full capacity in all lanes. For this reason, the deep-seated rutting issues have been consistently addressed with mill and overlay procedures, wherein the upper 40 mm or 80 mm of HMA is milled from the pavement and replaced with an equivalent thickness, which then exhibits the same failure after another three to seven years. In order to address this issue for a longer term, the MTO was interested in the development of a new rehabilitation technique using precast concrete panels inlayed into the HMA pavement structure. The design of a trial section to evaluate the precast concrete inlay panels (PCIP) was developed in conjunction with the MTO, the Fort Miller Company, the Cement Association of Canada, and Golder Associates. The PCIP design was based off typical precast concrete pavements but was modified to address the unique conditions of inlay within HMA pavement. The trial was 100 m in length and was comprised of 22 panels. The support conditions beneath precast concrete pavements have been found to be a significant factor in determining their performance. For this reason, three support conditions were designed, each with different costs and benefits in terms of overall constructability; the support conditions were Asphalt-supported (AS), Grade-supported (GraS), and Grout-supported (GroS). The construction of the trial section took place between September 19th and September 23rd, 2016, with the installation of each support condition taking place on a separate night. Dufferin Construction was the head contractor who undertook the construction. The timing of the individual construction activities and any issues that arose were monitored throughout the course of the construction. Following construction, an analytical hierarchy process was used to analyze the three support conditions in term of their relative constructability. The analysis was performed with input from both Dufferin Construction and the MTO. It was found that the GroS panels were the most ideal choice in terms of construction, based on the criteria that were used in the analysis. Data from instrumentation that was installed beneath the PCIP trial during construction indicate that moisture penetrated beneath the panels shortly after the completion of construction, indicating that the joints should be improved and that a drainage detail is required. The instrumentation also indicated a higher load concentration beneath the joints of a loaded panel in relation to the mid-panel location. Various surface analyses were undertaken during highway closures, including visual analyses, surface texture scanning, and roughness and friction measurement. The three support conditions were found to behave similarly for all tests except surface roughness, in which the GroS section was found to be significantly less rough than the other two support conditions. This was due to the high degree of control over panel elevation differences in this design. A life cycle cost analysis was undertaken to compare the PCIP strategy to the mill and overlay strategy that had been used in the past. It was found that the PCIP strategy generally has a higher life cycle cost because of its high initial costs, and the present worth cost difference between the two strategies was sensitive to factors that affected the initial cost, such as the panel unit cost and the installation rate. The analysis was based on several cost and maintenance assumptions that will be further clarified as the service life of the PCIP rehabilitation is better defined. Finally, several design improvements suggestions were made based on the performance and construction of the PCIP trial. These include increased strength specifications, advanced milling control, improved HMA edge protection, joint material design, drainage details, and diamond grinding following the complete installation of the PCIP rehabilitation.