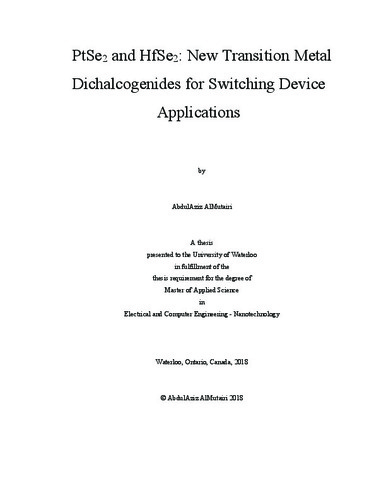 Recently, silicon-based complementary metal-oxide-semiconductor (CMOS) technology has been struggling in keeping the continuous improvement predicted by Moore’s Law. Hence, significant efforts have been made to find alternatives to the conventional silicon technology. Nanoelectronics based on two-dimensional (2D) materials, such as black phosphorus (BP) and molybdenum disulfide (MoS2), have demonstrated great potential for electronic devices due to their intriguing mechanical, optical and electrical properties. In this thesis, two of novel 2D materials among the transition metal dichalcogenides (TMDs) family have been explored for the use in nanoelectronic devices – platinum diselenide (PtSe2) and hafnium diselenide (HfSe2). It was reported earlier that PtSe2 and HfSe2 exhibit higher carrier mobilities among PtX2 and HfX2 families. First-principle simulations and atomistic quantum transport simulations based on the non-equilibrium Green’s function (NEGF) method within a tight-binding (TB) approximation are used to study PtSe2 and HfSe2 and their device applications. Despite the fact that PtSe2 has a relatively small electron effective mass (0.21m0), its six conduction valleys in the first Brillouin zone give rise to relativity large density of states (DOS). As a result, compared to its molybdenum diselenide (MoSe2) counterpart, PtSe2 field-effect transistors (FETs) exhibit better on-states characteristics (>30%) while maintaining a near-ideal subthreshold swing (SS) of ~64 mV/dec. The scaling study of the channel length (Lch) and the equivalent oxide thickness (EOT) show that a near ideal SS can be persevered with channel lengths longer than 15 nm or through aggressive scaling of the gate oxide (e.g., EOT = 0.4 nm). On the other hand, HfSe2 FETs exhibit nearly identical symmetric transfer characteristics for n-type (NMOS) and p-type transistors (PMOS) despite its asymmetrical effective mass and DOS in the conduction and the valence band. Both exhibits steep switching (<70 mV/dec) with exceptional on- current (~1 mA/μm). Through the scaling study, it was revealed that HfSe2 FETs exhibit great immunity to short-channel effects (SCE) at Lch ≥ 15 nm, but show significant degradations in subthreshold swing and drain-induced barrier lowering at sub-10 nm channel even with a thin gate dielectric. Finally, both NMOS and PMOS HfSe2 devices exhibited excellent intrinsic device performance, making them promising candidates for future logic device applications.