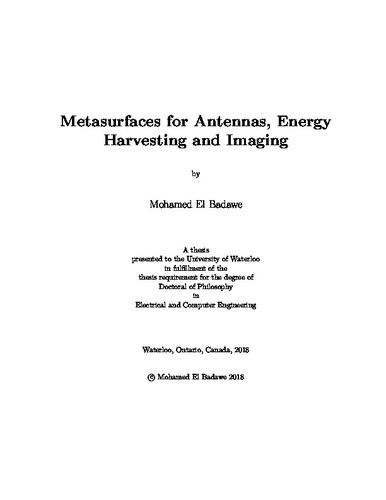 Metamaterials are materials with artificial structures, engineered to produce electromagnetic properties not readily available in nature. Metamaterials have generated broad interest and utilization in various applications because of their engineer-able permittivity and permeability. Metasurfaces form the most-used class of metamaterials in all electromagnetic applications, from microwave to optical, because of their simplicity compared to bulky 3D structures. Metasurfaces are created using an ensemble of electrically small resonators. Previously, the metasurface concept was used to redirect or focus light, with the surface profile being tailored to control the phase and magnitude of the current at each cell. In the first part of this dissertation, a metasurface is used to create a new antenna concept by tailoring the feed for each resonator to create optimal radiation behaviour. The resonators are placed on a flat surface and connected to one feed point using different feed mechanisms to achieve desired current phase at each resonator. Unlike conventional array antennas, in which the distance between adjacent antennas is maintained at approximately half the wavelength to reduce mutual coupling between adjacent antennas, here the distance between the radiating elements is electrically very small. This effects good impedance matching of each resonator to its feed. The metasurface antenna has strong potential for a variety of traditional and non-traditional applications. Its flexible design (high degree of optimization freedom) facilitates its use on a variety of non-Cartesian and platforms. A prototype was fabricated and tested, showing positive agreement between numerical simulations and experimental results of the metasurface antenna. In this part, a concept is presented to enable a systematic design of low-profile conformal antennas. The concept is based on using closely spaced electrically-small radiators. An ensemble of the radiators is placed in a periodic arrangement and the phase of the feed for each element is set to create a phase front orthogonal to the direction where maximum radiation is desired. The phase front is created based on the assumption that each electrically-small radiator is essentially a Huygens source radiating in the open space. A novel method is proposed in the second part of the thesis that emerge metasurface for energy harvesting and wireless power transfer. Unlike earlier designs of metamaterial harvesters where each small resonator was connected to a load, in this design, the power received by the resonators is channeled collectively into one load, thus maximizing the power density per load. Another contribution of the metasurface harvester of this work, based on the concept of perfect absorbance and channeling to one load, is the design of a metasurface medium with near unity electromagnetic energy harvesting. Two different feed networks with different impedances matching techniques are proposed to deliver the maximum power collected by all cells to just one load. Prototypes were fabricated and tested; the numerical simulation and the experimental measurements showed that the proposed metasurface harvester was sufficient to collect microwave energy and deliver it to one load through vias using one feed network. The third part presents a new paradigm of imaging objects using metasurfaces. In this part, an extensive study has been done to examine the metasurface panels for imaging. In conventional imaging methods, a raster scan is used to sense any differences or changes in the object, whereas here, objects are imaged without any scan. The mothed leveraging the voltage from each cell and by using a simple Matlab code these voltages will build the image of the object. This method showed promising results through the numerical simulation of imaging for both metal and dielectric materials.