A Platform for Generating Anomalous Traces Under Cooperative Driving Scenarios 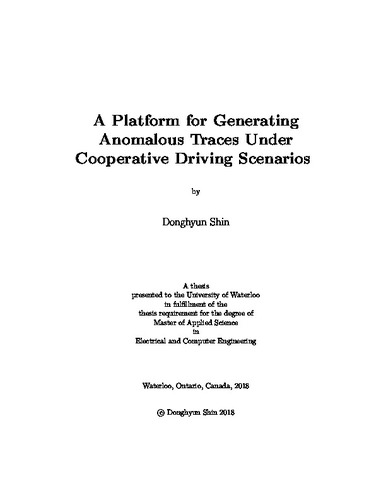 As we allow more critical decisions to be made by software, it becomes increasingly necessary to ensure the decisions made are correct. One approach is to monitor the software for signs of an anomaly. The approach is an active area of research with many proposed methods. For validating anomaly detection techniques, two popular approaches exist: Using an existing data trace, such as Knowledge Discovery and Data (KDD) Cup 1999 data, or injecting attacks into a tool used in industry. Both approaches lack flexibility; using existing traces constrain the validation to the way they are captured, while injecting attacks into an industry tool may require prior knowledge or characterization of it. A well-characterized platform that is built for trace generation would address the flexibility problem. On the other hand, autonomous driving is a field that demonstrates the criticality of decisions software discussed in the beginning. Specifically, cooperative autonomous driving scenarios, due to interactions between cars, can generate complex traces that would be of interest for researchers seeking to validate their anomaly detectors. In this thesis, we propose a cyber-physical system for collecting traces for testing anomaly detectors, based on cooperative autonomous driving. We provide the design and implementation of the proposed system. The three-tier design of the system allows researchers to generate different traces by extending the system on different levels, from different control and estimation methods to new cooperative driving scenarios. It also provides a suite of tools for introducing anomalies and collecting traces. A Failure Mode Effects Analysis (FMEA) of the system is done to guide the creation of new anomalies. Finally, traces generated by the proposed system is used on an existing anomaly detector to verify its usefulness while the trace tools and anomaly injection tools are tested for its interference with the main system.