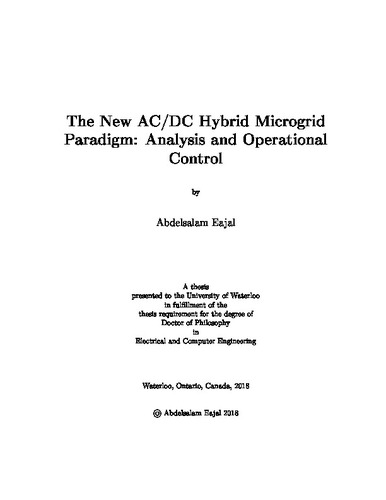 AC/DC hybrid microgrids (HMGs) represent a promising architecture that allows the hosting of innovative dc energy resources, such as renewables, and modern dc loads, such as electric vehicles, thereby reducing the number of conversion stages and offering other technical and cost benefits. Such advantages have prompted power distribution planners to begin investigating the possibility of hybridizing existing ac grids and designing new ac/dc hybrid clusters, referred to as microgrids, as a step toward an envisioned smart grid that incorporates multiple ac/dc microgrids characterized by "plug-and-play" features. Despite their potential, when either islanded or interfaced with the main grid, HMGs create challenges with respect to system operation and control, such as difficulties related to precise power sharing, voltage stability during a contingency, the control and management of power transfer through the interlinking converters (ICs), and the coordination of local distributed energy resources (DERs) with the hosting main grid. An understanding of HMGs and their operational philosophy during islanding will assuredly pave the way toward the realization of a future smart grid that includes a plug-and-play feature and will alleviate any operational challenges. However, the planning and operation of such islanded and hybrid systems are reliant on a powerful and efficient power flow analysis tool. To this end, this thesis introduces a novel unified, generic, flexible power flow algorithm for islanded/isolated HMGs. The developed algorithm is generic in the sense that it includes consideration of the unique characteristics of islanded HMGs: a variety of possible topologies, droop controllability of the DERs and bidirectionality of the power flow in the ICs. The new power flow formulation is flexible and permits the easy incorporation of any changes in the DER operating modes and the IC control schemes. The developed algorithm was validated against a detailed time-domain model and applied for the analysis of a variety of operational and control aspects in islanded HMGs, including the problem of imprecise power sharing and droop control of the ICs. The proposed load flow program can form the basis of and provide direction for further studies of islanded HMGs. This thesis also presents a deeper look at the problem of inaccurate active and reactive power sharing in islanded droop-based HMGs and proposes a unified and universal power sharing scheme that can simultaneously ensure precise power sharing in both ac and dc subgrids. Test results demonstrate the capability of the developed scheme with respect to achieving exact power sharing not only among DERs in proportion to their ratings but also among ICs that interface adjacent ac and dc microgrids. The developed unified power sharing scheme would assist system planners with the effective design of droop characteristics for DERs and ICs, which would result in enhancements such as the avoidance of converter overloading and the achievement of precise load sharing. Another operational aspect that was thoroughly investigated for this thesis is the possibility of voltage instability/collapse in islanded HMGs during contingencies. This research unveiled the possibility of voltage instability in HMGs that include constant power loads and a mix of synchronous-based and converter-based generating units. As indicated by the voltage stability analysis presented here, despite the fact that healthy microgrids have far-reaching loadability boundaries, the voltage at some ac/dc load buses can unexpectedly collapse during abnormal conditions. The analysis also revealed that fine tuning the droop characteristics of DERs and ICs can enlarge the voltage stability margin and safeguard the entire microgrid against collapse during contingencies, all without the sacrifice of a single load. A final component of this thesis is the proposal of a two-stage stochastic centralized dispatch scheme for ac/dc hybrid distribution systems. The developed dispatch scheme coordinates the operation of a variety of DERs, such as distributed generators and energy storage systems. It also ensures the coordinated charging of electric vehicles and models the degradation of their batteries that occurs due to the vehicle-to-grid action. The energy coordination problem has been formulated as a two-stage day-ahead resource scheduling problem: the intermittent supply; the variable demand, which includes electric vehicles; and the fluctuating real-time energy price are all modelled as random variables. The first stage produces day-ahead dispatch decisions for the dispatchable DG units. For a set of possible scenarios over the next 24 h, the second stage determines appropriate corrective decisions with respect to the import/export schedule, storage charging/discharging cycles, and electric vehicle charging/discharging patterns. The simulation results demonstrate the effectiveness of the developed scheme for optimally coordinating the various components of future ac/dc hybrid smart grids. Despite its substantial merits and value as a host for ac and dc technologies, a smart grid with HMGs creates previously unexperienced operational challenges for system planners and operators. The work completed for this thesis could help pave the way for the realization of ac/dc hybrid smart grids in years to come.