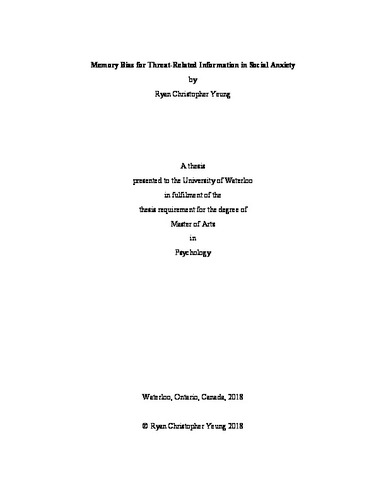 Biases in what is committed to memory and ultimately remembered are a key feature in individuals plagued by high levels of social anxiety. By selectively remembering the unfavourable aspects of past social situations, early work has suggested that those high in social anxiety may have enhanced memory for threat-related information. Other research has suggested that because threatening material is also most often an unwanted, irrelevant distraction to the individual’s task at hand, the effects of threat-relatedness have not been properly disentangled from the effects of task-relevance. In other words, although memories of social blunders are threat-related, as long as the individual is not intentionally attempting to re-experience their failures, these memories can also be seen as irrelevant distractors. Some have even suggested that highly socially anxious individuals may instead have enhanced memory for all distractors, not simply threat-related ones. Over the course of this thesis, the aims were to investigate the conditions under which a memory bias in high social anxiety is produced or eliminated, as well as to probe for the potential cognitive mechanisms underlying the bias. In Experiment 1, the interaction between threat-relatedness and task-relevance was examined in individuals high compared to low in social anxiety. Using a target-distractor paradigm, participants either saw a series of neutral or threatening target words, which they were asked to commit to memory; each target was simultaneously paired with a neutral or threatening distractor word. Highly socially anxious participants showed enhanced memory for threat-related distractors on a subsequent recognition test, but only when the targets they were asked to commit to memory were also threat-related. Such a result suggests that it is only when they are primed, or in a socially threatening mindset, that a memory bias for threat-specific, and irrelevant information, emerges. Prior to becoming part of long-term memory, information is first maintained in one’s working memory buffer. Thus, it stands to reason that any bias in the processing of threatening material may originate at the level of working memory. In Experiment 2, a series of word span tasks was administered to participants that were high or low in social anxiety. All participants performed three word span tasks, each with a unique word list constructed to have a different level of threat-relatedness: neutral, general threat, or social threat. We found that those high relative to low in social anxiety had reduced working memory capacity for words related to socially threatening concepts, compared to words related to neutral or generally threatening concepts. These findings suggest a bias exists in terms of what is maintained in a working memory buffer, which could explain how long-term memories are ultimately distorted in favour of threatening information. In Experiment 3, the specificity of the working memory bias was further examined. We aimed to rule out a deficit in ability to cluster semantically similarity words, as an alternative explanation for the reduction to working memory capacity observed in Experiment 2. Even after introducing an additional word span task that was both neutral and semantically similar, highly socially anxious individuals still only showed reduced working memory capacity for socially threatening words. In demonstrating that long-term and working memory biases only emerge under specific conditions, the current research suggests that the characterization of individuals with high social anxiety as having poor general attentional control is inaccurate. This thesis specifies the precise conditions, and potential mechanism of action, that lead to a memory bias in such individuals.