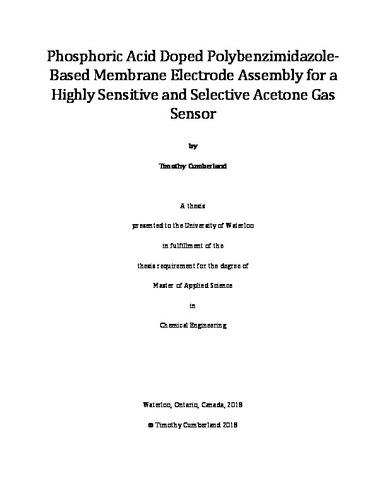 The increase in demand for small, inexpensive and portable gas sensors, which are sensitive and reliable, have generated much of the research interest toward solid oxide metal-based acetone gas sensors. However, despite the numerous improvements made to these devices, issues such as high energy consumption, poor sensitivity and selectivity have hindered their advance to the commercial stage. Medium to high temperature fuel cells have been studied extensively. Thus, this represents an opportunity to capitalize on the opportunity to design a new sensor technology that can circumvent some of the disadvantages inherently found in solid oxide sensors. This work is based on a proof-of-concept phosphoric acid doped polybenzimidazole (PBI)-based fuel cell acetone gas sensor as a potential alternative to the current solid metal oxide sensors. The fuel cell sensor was fabricated from commercially available membrane electrode assembly (MEA) and PBI membranes. Both solid and porous PBI membrane morphologies were studied in detailed to explore their ion conductivity and their effects on the sensor performance. Porous PBI membranes were found to have superior ion conductivity in terms of thickness, acid doping concentration and temperature over the solid membrane. MEAs fabricated from these membranes were evaluated as sensors for acetone gas. The porous PBI membranes with thickness of 100-105 µm, acid doping with 5M H₃PO₄ and operated at 140℃ were found to have the best sensing characteristics over a parameter range of 15 – 200 µm, 100 – 180℃, 2 – 10 M H₃PO₄. Higher sensor response was obtained at 180℃ but the MEA’s mechanical integrity was severely compromised. Sensitivity analysis on an optimized sensor revealed a linear relationship between the sensor response and acetone concentration that was valid over a wide range of acetone concentrations. This is a desirable property that current solid oxide sensors cannot yet achieve. The sensor also had comparable selectivity to that of solid oxide sensors for other volatile gases. However, due to the commercial nature of the catalyst and its low catalyst loading, the detection of the fuel cell sensor was within the range of 15-20 ppmv. Overall, the proof-of-concept showed potential with many proposed improvements to enhance the catalyst activities and selectivity over that currently available.