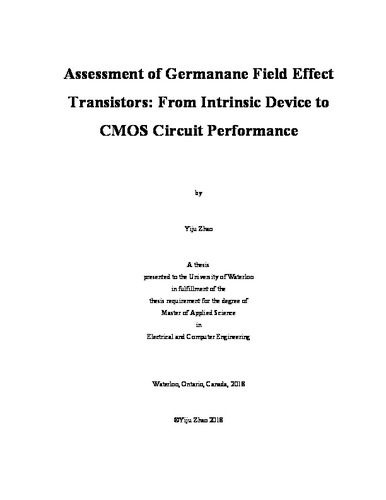 Two-dimensional (2D) semiconductors such as transition metal dichalcogenides (TMDs) and black phosphorus (BP) have been in the spotlight for next-generation complementary metal-oxide- semiconductor (CMOS) technology due to their outstanding electronic properties. Recently, germanane (GeH), a hydrogenated germanium monolayer has emerged as a new family of 2D semiconductors. High carrier mobility of GeH as well as promising potential for electronic devices were predicted earlier. However, previous studies were based on a semi-classical model, which cannot properly capture quantum mechanical phenomena generally observed in nanoscale devices. In addition, intrinsic device performance, such as intrinsic delay and switching energy, and circuit-level analyses of GeH field- effect transistors (FETs) are currently absent from the field, the understanding of which will be essential to make use of GeH for future electronic devices. Therefore, in this thesis, a comprehensive study, including material parameterization, device optimization and circuit analysis of GeH FETs will be discussed by means of rigorous self-consistent atomistic quantum transport simulations within a tight- binding approximation. This thesis covers the following topics: (1) introduction to multi-scale simulations including material parameterization, device simulation and circuit analysis, (2) investigation of transport characteristics and the scaling limit of n-type GeH metal-oxide-semiconductor (MOS) FETs, (3) assessment of GeH MOSFETs for CMOS technology with device optimization, (4) investigation of intrinsic performance of GeH Schottky-barrier (SB) FETs, and (5) discussion of possible future works, such as Ge-GeH heterostructure and multilayer GeH FETs to seek further opportunities. Our results suggest that GeH MOSFET exhibits excellent on-state performance as well as the superior circuit behaviors in terms of energy-delay product. It is also proven that GeH SBFET can be as promising as the MOSFET counterpart despite the performance degradation imposed by the metal-semiconductor junction. Our comprehensive study covering material, device and circuit simulation reveals the significant potential of germanane for the next-generation nanoelectronic devices.