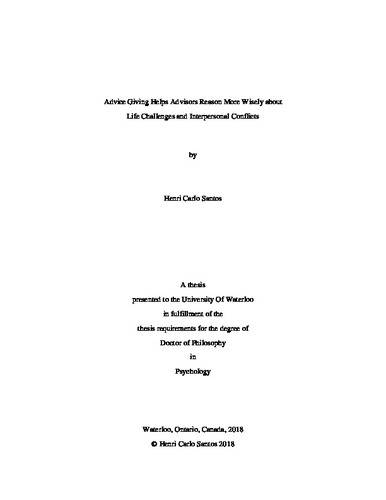 Does advice giving impact the advisor? While many studies have examined why it is helpful to receive advice, much less is known about what advisors gain when they give advice. Drawing on theories from adult development and social cognition, I propose that the act of advice giving can help advisors reason more wisely about a problem (by recognizing multiple perspectives, acknowledging a changing and uncertain world, having intellectual humility, seeking compromise, and using an outsider’s vantage point). To test this hypothesis, I utilized a multi-method approach. In Study 1, I examined 20 years of longitudinal data from over 3,000 U.S. Americans and found that advice-giving tendencies predicted wise attitudes, such as the appreciation of different perspectives, openness to change, and intellectual humility. I then experimentally manipulated advice giving in Studies 2, 3, and 4, assessing how wisely people reasoned about interpersonal conflicts. In Study 2, reflections on situations in which people gave advice produced wiser reasoning compared to reflections on situations in which people dealt with a social issue on their own. In Studies 3 and 4, giving advice about a standardized scenario resulted in wiser reasoning compared to imagining the same scenario happening to them personally. Moreover, in Study 4 advice giving about one scenario also led to downstream effects for wiser reasoning in a subsequent, unrelated scenario. These studies shed light on the social and cognitive processes involved in advice giving. They also show how advice giving can be a way to cultivate greater wisdom in people’s lives.