Towards a Plural History of 'Impact Investing' 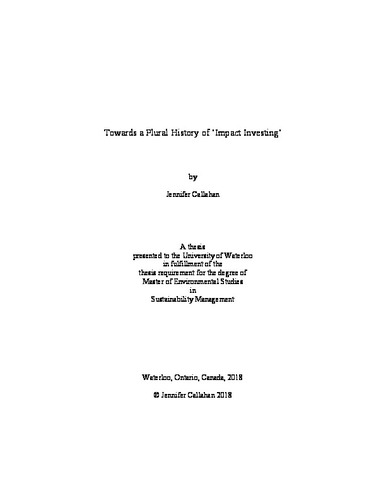 Conceived in 2007, ‘impact investing’ is an activity whereby investors intentionally pursue social and/or environmental return alongside financial return. It has attracted increasing interest, including from transnational financial institutions, and proponents offer it as a means to help tackle historically underfunded sustainable development initiatives. The mostly positive reception for impact investing in the literature, however, tends to neglect both the North-South tensions that characterized global financial governance over the previous five decades and the recent emergence of South-South cooperation. Utilizing a critical realist approach, this thesis seeks to interpret the phenomenon of impact investing and understand why it has become popular. I use a framework partially derived from the concept of transnational neopluralism and perform a thematic analysis of written texts about the sector. Though originally nurtured by philanthropic organizations, the results show that impact investing became a central component of a new posture adopted by many Northern governments with respect to developing nations, especially after the 2008 financial crisis. This shift was reinforced by structural economic changes that altered the profit prospects for many transnational corporations based in the North; these included, but were not limited to, a growing emphasis on the management of the environment and natural resources. By connecting the phenomenon to a broader political context, this project adds to the nascent body of academic literature about impact investing and contributes to the institutionalization of the field.