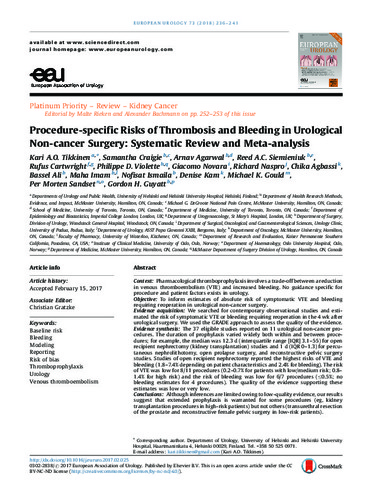 Context Pharmacological thromboprophylaxis involves a trade-off between a reduction in venous thromboembolism (VTE) and increased bleeding. No guidance specific for procedure and patient factors exists in urology. Objective To inform estimates of absolute risk of symptomatic VTE and bleeding requiring reoperation in urological non-cancer surgery. Evidence acquisition We searched for contemporary observational studies and estimated the risk of symptomatic VTE or bleeding requiring reoperation in the 4 wk after urological surgery. We used the GRADE approach to assess the quality of the evidence. Evidence synthesis The 37 eligible studies reported on 11 urological non-cancer procedures. The duration of prophylaxis varied widely both within and between procedures; for example, the median was 12.3 d (interquartile range [IQR] 3.1–55) for open recipient nephrectomy (kidney transplantation) studies and 1 d (IQR 0–1.3) for percutaneous nephrolithotomy, open prolapse surgery, and reconstructive pelvic surgery studies. Studies of open recipient nephrectomy reported the highest risks of VTE and bleeding (1.8–7.4% depending on patient characteristics and 2.4% for bleeding). The risk of VTE was low for 8/11 procedures (0.2–0.7% for patients with low/medium risk; 0.8–1.4% for high risk) and the risk of bleeding was low for 6/7 procedures (?0.5%; no bleeding estimates for 4 procedures). The quality of the evidence supporting these estimates was low or very low. Conclusions Although inferences are limited owing to low-quality evidence, our results suggest that extended prophylaxis is warranted for some procedures (eg, kidney transplantation procedures in high-risk patients) but not others (transurethral resection of the prostate and reconstructive female pelvic surgery in low-risk patients). Patient summary The best evidence suggests that the benefits of blood-thinning drugs to prevent clots after surgery outweigh the risks of bleeding in some procedures (such as kidney transplantation procedures in patients at high risk of clots) but not others (such as prostate surgery in patients at low risk of clots).