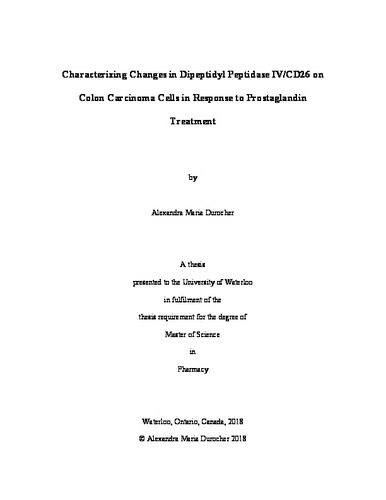 Dipeptidyl peptidase IV (DPPIV) – also known as CD26 – is a multifunctional transmembrane protease found on the surface of most human cells, and shows variable expression between different types of cancer. DPPIV activity may play a role in inhibiting cancer progression by interacting with components of the tumour microenvironment. DPPIV degrades several signalling molecules including the chemokine CXCL12. CXCL12 has been shown to facilitate tumour development when associating with its cell-surface receptor CXCR4. The cell-surface expressions of CXCR4 and DPPIV/CD26 exhibit an inverse relationship; an increase in DPPIV/CD26 is accompanied by a decrease in CXCR4, and vice versa. J-series prostaglandins (i.e. PGD2, PGJ2 and 15d-PGJ2) have been shown to downregulate CXCR4 expression on colorectal carcinoma cells, which in turn may upregulate the expression and activity of DPPIV/CD26. Therefore, I investigated whether J-series prostaglandins altered DPPIV/CD26 expression and activity on colorectal cancer cells. Results showed that these prostaglandins did not upregulate DPPIV/CD26 mRNA expression, nor did they increase its whole-cell or cell-surface protein expression. J-series prostaglandins did increase the mean DPPIV/CD26 dipeptidase activity, however this increase was not statistically significant due to substantial inter-experimental variability. 15d-PGJ2 treatment also significantly decreased the rate of cell migration on both CRC cells and normal fibroblasts. These findings suggest that J-series prostaglandins may promote DPPIV/CD26 specific activity in colorectal carcinoma. However, 15d-PGJ2 was found to be significantly unstable at high concentrations in serum-supplemented culture media and this instability in culture medium may explain the inconsistent cell response in vitro.