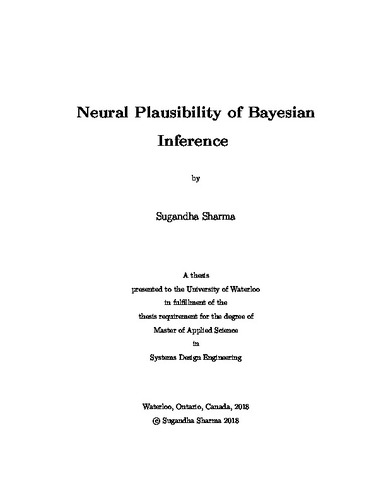 Behavioral studies have shown that humans account for uncertainty in a way that is nearly optimal in the Bayesian sense. Probabilistic models based on Bayes' theorem have been widely used for understanding human cognition, and have been applied to behaviors that range from perception and motor control to higher level reasoning and inference. However, whether the brain actually uses Bayesian reasoning or such reasoning is just an approximate description of human behavior is an open question. In this thesis, I aim to address this question by exploring the neural plausibility of Bayesian inference. I first present a spiking neural model for learning priors (beliefs) from experiences of the natural world. Through this model, I address the question of how humans might be learning the priors needed for the inferences they make in their daily lives. I propose neural mechanisms for continuous learning and updating of priors - cognitive processes that are critical for many aspects of higher-level cognition. Next, I propose neural mechanisms for performing Bayesian inference by combining the learned prior with the likelihood that is based on the observed information. Through the process of building these models, I address the issue of representing probability distributions in neural populations by deploying an efficient neural coding scheme. I show how these representations can be used in meaningful ways to learn beliefs (priors) over time and to perform inference using those beliefs. The final model is generalizable to various psychological tasks, and I show that it converges to the near optimal priors with very few training examples. The model is validated using a life span inference task, and the results from the model match human performance on this task better than an ideal Bayesian model due to the use of neuron tuning curves. This provides an initial step towards better understanding how Bayesian computations may be implemented in a biologically plausible neural network. Finally, I discuss the limitations and suggest future work on both theoretical and experimental fronts.