An Integrated Model of Contex, Short-Term, and Long-Term Memory 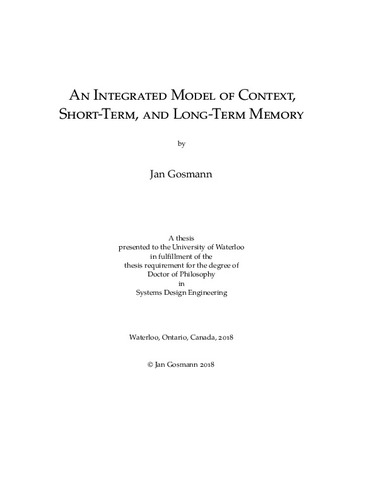 I present the context-unified encoding (CUE) model, a large-scale spiking neural network model of human memory. It combines and integrates activity-based short-term memory with weight-based long-term memory. The implementation with spiking neurons ensures biological plausibility and allows for predictions on the neural level. At the same time, the model produces behavioural outputs that have been matched to human data from serial and free recall experiments. In particular, well-known results such as primacy, recency, transposition error gradients, and forward recall bias have been reproduced with good quantitative matches. Additionally, the model accounts for the effects of the acetylcholine antagonist scopolamine, and the Hebb repetition effect. The CUE model combines and extends the ordinal serial encoding (OSE) model, a spiking neuron model of short-term memory, and the temporal context model (TCM), a mathematical model of free recall. To the former, a neural mechanism for tracking the list position is added. The latter is converted into a spiking neural network under considerations of the main features and simplification of equations where appropriate. Previous models of the recall process in the TCM are replaced by a new independent accumulator recall process that is more suited to the integration into a large-scale network. To implement the modification of the required association matrices, a novel learning rule, the association matrix learning rule (AML), is derived that allows for one-shot learning without catastrophic forgetting. Its biological plausibility is discussed and it is shown that it accounts for changes in neural firing observed in human recordings from an association learning experiment. Furthermore, I discuss a recent proposal of an optimal fuzzy temporal memory as replacement for the TCM context signal and show it to be likely to require more neurons than there are in the human brain. To construct the CUE model, I have used the Neural Engineering Framework (NEF) and Semantic Pointer Architecture (SPA). This thesis makes novel contributions to both. I propose to distribute NEF intercepts according to the distribution of cosine similarities of random uniformly distributed unit vectors. This leads to a uniform distribution of active neurons and reduces the error introduced by spiking noise considerably in high-dimensional neuronal representations. It improves the asymptotic scaling of the noise error with dimensions d from O(d) to O(d^(3/4))$. These results are applied to achieve improved Semantic Pointer representations in neural networks are on par with or better than previous methods of optimizing neural representations for the Semantic Pointer Architecture. Furthermore, the vector-derived transformation binding (VTB) is investigated as an alternative to circular convolution in the SPA, with promising results.