The quantum and the gravity: Newtonian and Cosmological applications 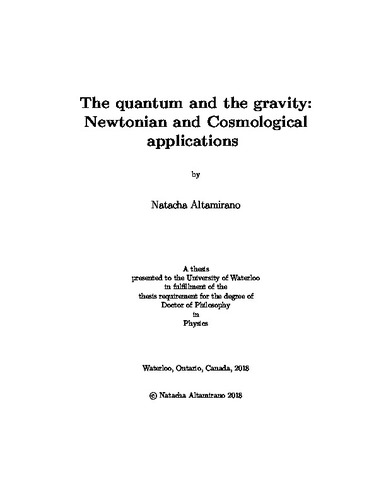 The gravitational decoherence field studies the suppression of coherence in quantum systems caused by effects rooted in the gravitational interaction. This models are not just important to yield interesting ideas about the search, in regimes others than the Planck scale, for the interplay between quantum mechanics and general relativity, but also from a theoretical point of view. The fact that the gravitational field can not be shielded opens the question of how strong will the gravitational ‘environment’ decohere a quantum system? and if this decoherence can somehow explain the absence of macroscopical super- positions? This thesis studies in depth the ‘Classical Channel Gravity’ (CCG) model, a recent proposal of gravitational decoherence that assumes that the gravitational interac- tion is always accompanied with an intrinsic decoherence mechanism which ensures that there is no transmission of quantum information between the parties involved. This model can be understood a series of weak continuous quantum measurements accompanied with a feedback term produced by some underlying hidden gravitational degrees of freedom. We first study all the possible emergent dynamics from collisional Markovian dynamics; these ones range from exact unitary to arbitrary fast decoherence (Zeno effect). The second part of the thesis is devoted to study the Newtonian and post Newtonian limits of the CCG model, with particular focus on the testability features of CCG. In particular, we apply this model to coupled clocks and find that the amount of decoherence predicted by CCG is the same as the decoherence that an ‘environment of clocks’ will imprint in a single clock in the context of unitary evolution. On the other hand, we find that this effect is far from being detectable with the current achieved time accuracy. However, CCG as a model for multi partite systems and two systems with very different masses seems to yield an amount of decoherence that is not only able to be detectable with current experiments but also seems to indicate that this model is ruled out. Nevertheless, we also mention potential caveats with our assumptions and discuss other physically motivated directions to further study this result. Finally, we also explore the extension of CCG for the cosmological scenario. In this context the scale factor is being decohered by test particles ‘sitting’ on spacetime. We find that this decoherence will be seen by an observer unaware of the CCG fundamental mechanism as an emergent form of dark energy filling the universe.

Natacha Altamirano (2018). The quantum and the gravity: Newtonian and Cosmological applications. UWSpace. http://hdl.handle.net/10012/13486