Individual differences in the emotional modulation of gaze-cuing 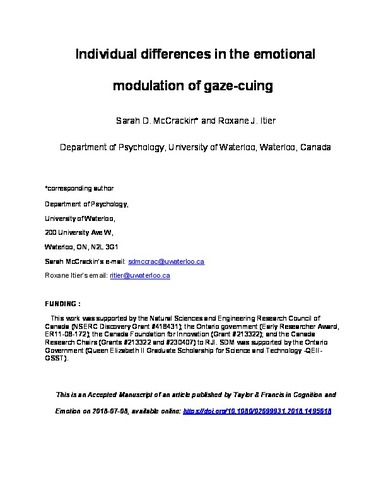 Gaze-cuing refers to the spontaneous orienting of attention towards a gazed-at location, characterised by shorter response times to gazed-at than non-gazed at targets. Previous research suggests that processing of these gaze cues interacts with the processing of facial expression cues to enhance gaze-cuing. However, whether only negative emotions (which signal potential threat or uncertainty) can enhance gaze-cuing is still debated, and whether this emotional modulation varies as a function of individual differences still remains largely unclear. Combining data from seven experiments, we investigated the emotional modulation of gaze-cuing in the general population as a function of participant sex, and self-reported subclinical trait anxiety, depression, and autistic traits. We found that (i) emotional enhancement of gaze-cuing can occur for both positive and negative expressions, (ii) the higher the score on the Attention to Detail subscale of the Autism Spectrum Quotient, the smaller the emotional enhancement of gaze-cuing, especially for happy expressions, and (iii) emotional modulation of gaze-cuing does not vary as a function of participant anxiety, depression or sex, although women display an overall larger gaze-cuing effect than men.