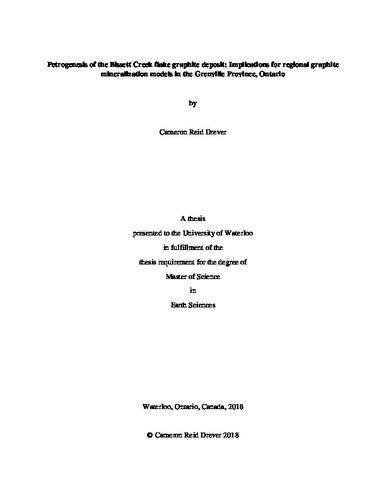 Graphite is a critical component of green and renewable energy technologies. In Ontario, graphite deposits are scattered throughout the pre-Grenvillian Laurentian Margin and the Composite Arc Belt of the Grenville Province. The Bissett Creek deposit in central Ontario is one of the most advanced graphite exploration properties in the region with a large proportion (~70%) of high purity >180μm graphite. Large flake graphite size, as seen in the Bissett Creek deposit, is one of the key factors affecting the economic viability of graphite concentrates for manufacturing applications. However, the geological processes responsible for the formation of this deposit and similar deposits, in the region and internationally, are unclear. To facilitate successful exploration and production of flake graphite deposits, an understanding of the processes controlling mineralization and the timing of mineralization must be determined. At Bissett Creek, graphite is hosted in quartzofeldspathic, aluminous and calc-silicate gneisses. These units are stratabound by barren quartzofeldspathic gneisses. All units have undergone polyphase folding and have foliations with shallow to moderate dips predominantly to the east and north. Graphite mineralization is characterized by homogeneously distributed and disseminated graphite flakes, about 1 to 6mm in size, that compose 2–10 vol.% of the mineralized gneisses. Graphite flakes are interleaved with metamorphic minerals, most notably biotite and garnet. Geothermobarometry using the metamorphic minerals interleaved with the graphite yields conditions of 620ºC to 790ºC at 0.8 GPa to 1.5 GPa, which is consistent with regional upper amphibolite- to granulite-facies metamorphism. Whole-rock samples have carbon isotope values (δ13CVPDB) ranging from -28.3‰ to -14.0‰, which suggests that graphite formed from organic materials. Carbon isotope modelling indicates that this range of the values could be generated through either single or multicomponent (CH4 and CO2) fractionation of a fluid from an isotopically homogeneous source, although a single component (CO2) fractionation is more likely. Whole-rock sulfur isotopes (δ34SVCDT) have values ranging from 9.7‰ to 15.0‰ and are compatible with an organic source and a sedimentary origin. Therefore, the Bissett Creek flake graphite deposit was likely formed from metamorphism of in situ organic material, but interactions with carbon bearing metamorphic fluids generated during high-temperature metamorphism and partial melting could have played a role in the formation of the extra-large graphite flakes found in the deposit. The conclusions of this study have also been used to formulate exploration guidelines to help assist in the discovery and development of additional flake graphite deposits in the pre-Grenvillian Laurentian Margin.