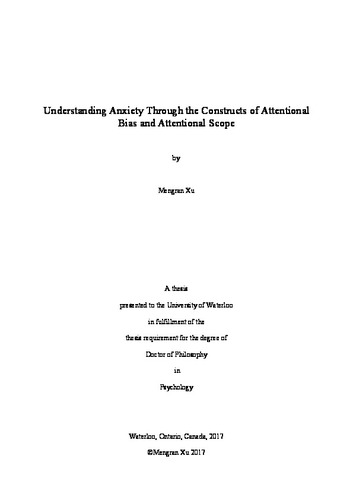 Anxiety disorders are common and debilitating, and there are substantial research efforts to better understand and treat them. These efforts are characterized by two leading trends: an emphasis on the role of attentional biases in their development and persistence, and an emphasis on mindfulness as a means of ameliorating them. However, there are substantial problems with both lines of research. Fist, research on attentional biases to threat (ABT) has yielded highly inconsistent findings with respect to the nature of the biases and when they occur. Most studies to date have failed to account for factors that influence attentional deployment, such as motivation to approach vs. avoid threat, and almost no studies have examined attentional biases that occur when people are occupied with an attentionally demanding task, which far more resembles what happens in real life when faced with a threat. There is emerging evidence showing that visual attention to threat varies substantially according to motivation, and that clinically significant anxiety may be characterized more by ambivalence about where to deploy attention in face of threat. Second, mindfulness is now widely recommended as a treatment for anxiety disorders despite the absence of a viable theory as to the mechanism of action by which it is effective. This is especially concerning given the current hype about its effects. Research has clearly demonstrated that anxiety is associated with a narrow scope of attention (the one frowning face in an audience) as opposed to a broad scope of attention (the entire crowd). New theories proposed that a function of mindfulness is to broaden perspective, which may explain how mindfulness ameliorates anxiety. This program of research aimed to address these issues in three studies. The first study was designed to assess the impact of motivation to attend to vs. avoid attending to an external threat (a live tarantula) in people who were high in spider fear, while they completed a competing attentionally demanding task. The second study was designed to better understand ambivalent motivation by selecting a sample and stimuli that may yield a high degree of approach-avoidance conflict; in this study, individuals who self-identified as restrained eaters underwent a passive viewing task in which they were exposed to high calorie food vs. neutral images while their eye movements were tracked. The third study examined the extent to which a brief mindfulness intervention influenced the scope of perceptual attention, conceptual attention, and thought-action repertoires. Results from Studies 1 and 2 revealed a significant impact of motivation on attentional deployment, such that different motivational groups demonstrated different patterns of attentional biases to threat. This calls into question the conceptualization of ATB as a homogenous construct, as it would seem anxious individuals may engage in different types of attentional deployment when confronting threat. Results also revealed that individuals who showed high motivation to both look at and to avoid looking at the tarantula (that is, participants who were ambivalent) did not show a decrease in fear of the spider whereas all other participants did. In Study 2, individuals who reported high motivation to both look at and to avoid looking at high calorie food endorsed more restrained eating behaviours and stronger pathological beliefs, such that even looking at food could make one gain weight. Thus, ambivalent motivation may be a characteristic of greater psychopathology. In Study 3, it was found that for participants whose baseline attentional scope was narrow, mindfulness was associated with the broadening of attentional scope and an improvement in mood state. Theoretical and clinical implications for understanding and treating anxiety were discussed.