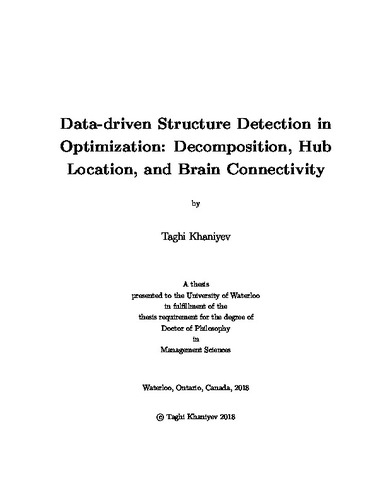 Employing data-driven methods to efficiently solve practical and large optimization problems is a recent trend that focuses on identifying patterns and structures in the problem data to help with its solution. In this thesis, we investigate this approach as an alternative to tackle real life large scale optimization problems which are hard to solve via traditional optimization techniques. We look into three different levels on which data-driven approaches can be used for optimization problems. The first level is the highest level, namely, model structure. Certain classes of mixed-integer programs are known to be efficiently solvable by exploiting special structures embedded in their constraint matrices. One such structure is the bordered block diagonal (BBD) structure that lends itself to Dantzig-Wolfe reformulation (DWR) and branch-and-price. Given a BBD structure for the constraint matrix of a general MIP, several platforms (such as COIN/DIP, SCIP/GCG and SAS/ DECOMP) exist that can perform automatic DWR of the problem and solve the MIP using branch-and-price. The challenge of using branch-and-price as a general-purpose solver, however, lies in the requirement of the knowledge of a structure a priori. We propose a new algorithm to automatically detect BBD structures inherent in a matrix. We start by introducing a new measure of goodness to capture desired features in BBD structures such as minimal border size, block cohesion and granularity of the structure. The main building block of the proposed approach is the modularity-based community detection in lieu of traditional graph/hypergraph partitioning methods to alleviate one major drawback of the existing approaches in the literature: predefining the number of blocks. When tested on MIPLIB instances using the SAS/DECOMP framework, the proposed algorithm was found to identify structures that, on average, lead to significant improvements both in computation time and optimality gap compared to those detected by the state-of-the-art BBD detection techniques in the literature. The second level is problem type where problem-specific patterns/characteristics are to be detected and exploited. We investigate hub location problem (HLP) as an example. HLP models the problem of selecting a subset of nodes within a given network as hubs, which enjoy economies of scale, and allocating the remaining nodes to the selected hubs. The main challenge of using HLP in certain promising domains is the inability of current solution approaches to handle large instances (e.g., networks with more than 1000 nodes). In this work, we explore an important pattern in the optimal hub networks: spatial separability. We show that at the optimal solutions, nodes are typically partitioned into allocation clusters in such a way that convex hulls of these clusters are disjoint. We exploit this pattern and propose a new data-driven approach that uses the insights generated from the solution of a smaller problem - low resolution representation - to find high quality solutions for the large HLPs. The third and the lowest level is the instance level where the instance-specific data is explored for patterns that would help solution of large problem instances. To this end, we open up a new application of HLPs originating from human brain connectivity networks (BCN) by introducing the largest (with 998 nodes) and the first three-dimensional dataset in the literature so far. Experiments reveal that the HLP models can successfully reproduce similar results to those in the medical literature related to hub organisation of the brain. We conclude that with certain customizations and methods that allow tackling very large instances, HLP models can potentially become an important tool to further investigate the intricate nature of hub organisations in human brain.