The effects of vegetation on the estimation of low flows: a high-resolution study in natural streams featuring novel techniques 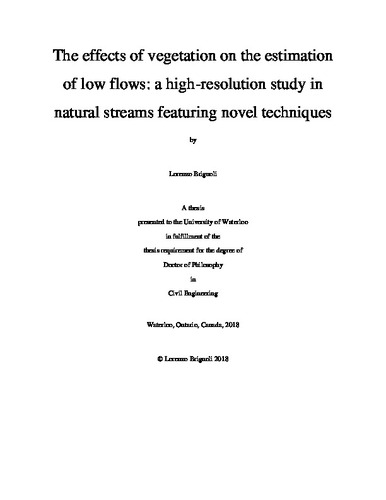 Accurate measurement of stream discharge under low-flow conditions is of utmost importance to many water resources practitioners. In most of the world, discharge is estimated at gauging stations using rating curves. These relate observed water level to field measured discharge, under the assumption that a direct proportionality exists between the two. However, if seasonal aquatic vegetation growth occurs, water levels (or stages) will rise as macrophytes increase flow resistance. Consequently, if this effect is not accounted for, the increase in water levels may be mistaken as an increase in discharge. Current methods to correct these errors in flow calculations can be time-consuming and do not always perform consistently, as they rely on sporadic discharge measurements and qualitative observations. As such, it is not uncommon for flow records to be discontinued during the summer, a period often coinciding with the low flow season in many climatic regions. During these months, incorrectly estimated flow values, or lack of flow records can have problematic consequences. For instance, reliable flow estimations are required to provide adequate water apportionments between parties, while avoiding water scarcity issues in downstream communities. Furthermore, the assessment of ecological low flow requirements for fish and benthic communities often depends on available flow records. As such, methods to aid in the estimation of flow records are warranted, especially at a time when climate change is being proven to exacerbate the severity of low flow extremes. There has been extensive research regarding the general relationship between aquatic vegetation and flow resistance. However, a lack of standardization has resulted in different methods of data collection and results, thus preventing universal comparison and the achievement of conclusive results. Consequently, reliable methods of quantifying vegetative flow resistance have not been established. This thesis is aimed at obtaining a thorough understanding of the effects of vegetation on flow resistance and using this knowledge to provide reliable methods to estimate low flow rates at gauging stations during the macrophytes growing season. To achieve this, it was paramount that the methods developed were capable of assessing vegetative flow resistance reliably and consistently. This was done by thoroughly quantifying the parameters often found proportional to channel roughness, such as plants stiffness and density, while flow and water level conditions were continuously monitored. A simple image processing technique was developed to map aquatic plants at the reach scale by analyzing aerial photogrammetry data, obtained using an Unmanned Aerial Vehicle (UAV). The data collection and processing methods presented are simple, reproducible, and allow for the high-resolution mapping of aquatic plants in a time-efficient manner. Results showed that the algorithm presented here consistently out-performed conventional manual post-processing techniques and in-stream surveys. Post-processed data were also used to estimate how ground data resolution affects the accuracy of flow resistance formulae, which in turn was used to assess the sensitivity of discharge estimates on vegetation mapping. A simple and cost-effective test, and associated testing apparatus, were developed to measure plants biomechanical properties (stiffness and density). Different than most methods found in literature, the test is not disruptive and can be undertaken on both submerged and emergent vegetation. It was first calibrated with artificial vegetation, of known biomechanical properties, and then tested on natural plants. Results showed that plants biomechanics evolve temporally following the growth and decay cycle of macrophytes. Therefore, these findings have useful implications for understanding seasonal changes in vegetative flow resistance which can impair rating curves during the low flow season. To gain a thorough insight on how vegetation can affect stage-discharge relationships, a three-year investigation was undertaken at two separate reaches (~100 m in length) located on a Southern Ontario stream. Here, it was determined that using conventional rating curves, average daily discharge can be overestimated up to 100%. Published equations to determine flow resistance were not capable of correcting these estimates. Different to most published studies, flow resistance was not found proportional to the average spatial density of vegetation, rather it was correlated to the distribution of macrophytes in the most densely vegetated parts of the reach. By characterizing the spatial distribution of vegetation, it was then possible to successfully correct flow estimates at the study reaches for the period of record affected by macrophyte growth. The developed correction procedure was also validated on three additional streams, with successful results. Therefore, these findings can be applied to other gauged sites affected by aquatic plant growth to provide accurate low flow records. Results from this thesis were obtained through a large dataset, both in terms of temporal and spatial resolution, and significantly expand previous findings regarding vegetative flow resistance. The methods presented herein can be readily applied to correct rating curves affected by vegetation growth in a time and cost-efficient manner. This can improve the estimation of environmental flows to aid in important water management decisions, such as water allocations for agricultural or potable water use. Further, more accurate aquatic habitat sustainability assessments can be achieved by using improved flow records. In turn, as these would reflect actual low flow conditions, they can be used to develop appropriate water taking targets that will not impact the environment negatively.

Lorenzo Brignoli (2018). The effects of vegetation on the estimation of low flows: a high-resolution study in natural streams featuring novel techniques. UWSpace. http://hdl.handle.net/10012/13475