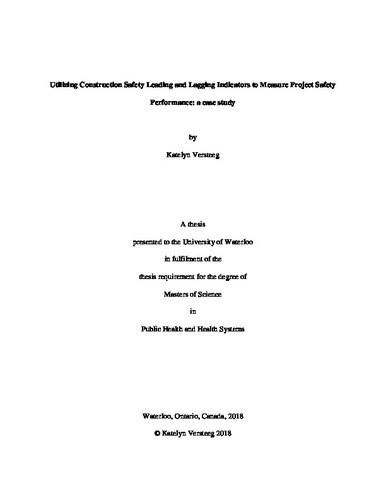 Background Construction accounts for 22% of all workplace fatalities in Ontario (Association of Workers' Compensation Boards of Canada, 2015), although construction only accounts for 7% of Ontario’s workforce (Statistics Canada, 2017a). Due to the dangers of the construction industry, safety indicators, termed leading and lagging, have been developed to measure safety performance and prevent further injury. Objective The objective of this thesis is to determine whether the relationship between safety leading and lagging indicators have predictable relationships, as they are on an industry level, when measured on a company level using company administrative data. Methods The case study involved the collection of safety indicators from 47 construction projects. An evaluation of available safety indicators was conducted and in the end 5 indicators were chosen for use in this study. These being counts of site inspections, toolbox talks, subcontractor notice of offenses, medical injuries, first aid injuries and project length. Since counts for the outcome variables exhibited an excess of zeros, the counts are assumed to be produced by two distributions, one being described by a standard Poisson process and the other a process that always produces a zero count. Four zero-inflated Poisson models were run to determine whether the leading indicator, site inspections or toolbox talks, led to a decrease in the value of the lagging indicators, medical injuries or first aid injuries. Model 1 tested the effect of site inspections on zero counts of medical injuries. Model 2 tested the effect of toolbox talks on zero counts of medical injuries. Model 3 tested the effect of site inspections on zero counts of first aid injuries. Model 4 tested the effect of toolbox talks on zero counts of first aid injuries. Results Models 1 and 2 found that number of medical injuries were not significantly related to either site inspections or toolbox talks. Models 3 and 4 found that first aid injuries were significantly related to site inspections and toolbox talks, when run independently. Yet, the estimate sizes of all four models were very small. Goodness of Fit tests were run to ensure that the sample distributions fit the hypothesized distributions of the models selected. These results showed that the lagging indicators were either not related to or had a small association to each of the leading indicators. Discussion This study showed that identifying the relationship between leading and lagging indicators may not be as easy as the theory suggests. This study had several limitations including use of administrative data, small sample size, and concern about data quality. Furthermore, theories about accident prevention and prevention research are also discussed. One theory discussed is that early accident prevention models suggest that some accidents are unpreventable. In the context of this study, it is possible that the few accidents that did occur were unpreventable in nature and could not be prevented through leading indicators. The second theory discussed was that Geoffrey Rose’ Theory of Prevention suggests that concepts tested on a population level may not work on an individual level. For this study, it means that the leading and lagging indicators developed on an industry level, may not be appropriate for testing on a company level. Finally, suggestions to how the participating company could improve safety research and their safety performance were given including collecting a safety climate indicator, conducting bi-annual meetings with safety reporting personnel, improving documentation of subcontractor safety performance, and reorganizing MB’s administrative data. Conclusion In conclusion, despite the fact that leading and lagging indicators have been developed on a simple assumption, there needs to be more research in order to better understand this relationship on a company level. Research needs to be completed to determine how the legislated paperwork that companies collect can be used to support injury prevention and decision making.