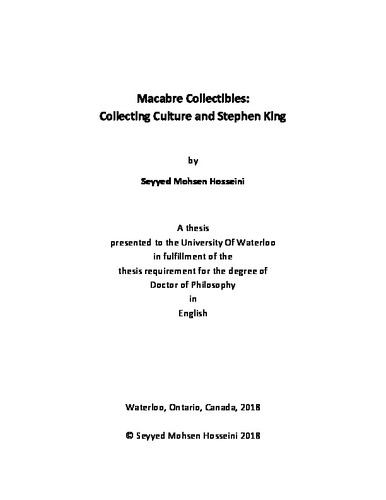 Objects have a significant place in Stephen King’s horror fiction and the landscape he has created in his numerous novels and short stories. The human-thing relationship in his fiction, however, has been generally reduced by critics to human-machine relationship. Going beyond this reductive duality and putting more emphasis on things in King’s horror factory is what this project is about. One of the best examples of useless objects known as things in Thing Theory is those accumulated as part of a collection. This study addresses the states of possessing and being possessed developed in the context of collecting in King’s selected fiction. Collecting in Stephen King involves more than cataloguing horror features and/or random bric-à-brac. There are instances in King’s novels where characters are described by their collections, to show their obsessions and deviations. This study goes even further and explores the system of collecting in order to discuss King’s career, the genre(s) he is associated with, and the social and cultural condition he has been part of. At the end of this journey, he is portrayed as a collectible himself. Of the four novels read in this study, It, Needful Things, and Duma Key respectively represent three modes of collecting, that is, systematic, fetish object, and souvenir. The last novel, Misery, is analyzed in terms of seriality, the intrinsic value common in all collections. This simple categorization, however, is not the purpose of this study. Concepts of hyperreality and simulation have been used to enrich the discussion in a higher level. Following the example of Eco’s “Travels in Hyperreality,” the goal is to re-visit the selected novels to provide commentaries on King’s horror fiction and its significance in American popular culture. The journey begins with the metaphor of It as a Wunderkammer and King’s systematic collecting of relics of an old genre. The order of things and its epistemological implications are discussed in the peculiar space created in the novel as a cabinet of curiosities. The time-space interactions in the anomalous environment within a collection are covered both in It and Duma Key. Besides a wider range of narrative possibilities, the heterotopic space in King’s sanctuary island of Duma Key provides damaged people with an opportunity to re-member and become full again. The therapeutic function of artistic creativity is also discussed in the context of collecting as a creative activity. The significant role of objects in identity formation finds an eerie dimension when pathological and extreme forms of collecting are analyzed in Needful Things. Authenticity, which is of great importance in collecting culture, is another theme in King’s little shop of horrors. The concept of fake things in this Faustian parable is expanded to a dichotomy between the real and unreal in King’s landscape of horror and his writing career. The chapter on Misery considers the fate of the popular author (King himself included) in the context of seriality. The confrontation of a serial writer and a serial killer (both considered as collectors) provides us with a dark image of genre writers bound by market demands and celebrity writers threatened by their fans. Stephen King, in short, has been created and nurtured in a collecting culture along with other related trends like pastiche and kitsch. He is a macabre collector as much as the constant readers who do not miss a single King.