The Effectiveness of Persulfate and Hydrogen Peroxide on the Oxidation of Hydrocarbon Contaminants at 30°C: A Study with Focus on the Performance of Compound Specific Isotope Analysis 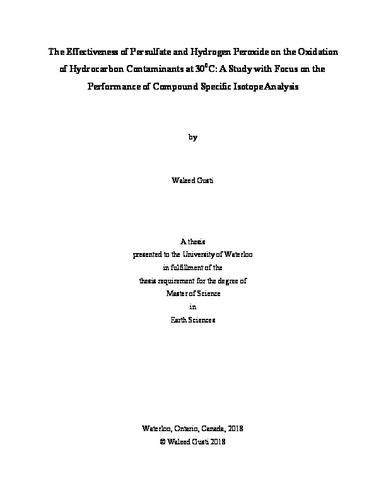 Two oxidants, persulfate and hydrogen peroxide, were used to investigate the effectiveness of in-situ chemical oxidation (ISCO) on target contaminants (sourced from industrial wastewater) in saline and high-temperature groundwater. Benzene, toluene, ethylbenzene, xylene (BTEX), trimethylbenzenes (TMBs), methyl tert-butyl ether (MTBE), and naphthalene were the target contaminants investigated. Different aspects were examined during this study: 1) the effectiveness of two different ratios of the activator Fe2+ to a stabilizer (citrate) relative to an activator-free control using persulfate as an oxidant; 2) the performance of three stabilizers - citrate, phytate, and silica - for hydrogen peroxide in three separate experiments; and 3) two dimensional compound specific isotope analysis (2D-CSIA) was performed using carbon and hydrogen isotopes to evaluate the extent of the transformation of BTEX, MTBE and TMBs between persulfate and hydrogen peroxide experiments, and to determine the degradation mechanism more precisely by the resulting enrichment factors using the Rayleigh equation which calculated the changes in stable isotope ratios of C and H isotopes with changes in the concentration of the contaminant compounds. As expected, the results showed that the activated persulfate caused a faster rate of contaminant oxidation than non-activated persulfate, and most of the hydrocarbons reached undetectable concentrations by the end of the experiments, with the exception of benzene, toluene, and MTBE. Of these compounds, MTBE was found to have the lowest rate of removal (~5%), as a result of the low persulfate concentration (5 g/L) used in the experiments. Compared to the persulfate, hydrogen peroxide was more efficient at oxidizing BTEX, TMBs, naphthalene, and MTBE, especially when citrate was used as a stabilizer (≥ 93% of destruction). Isotopically, CSIA was successful at distinguishing the isotopic changes for carbon and hydrogen isotopes, and provided insights on the best method for hydrocarbon degradation that resulted in the largest isotope enrichments. The experiments involving activated persulfate with a high ratio of citrate/iron caused the largest carbon isotopic fractionation compared to the other activated and unactivated persulfate experiments for MTBE (2.1‰ to 3.7‰) and toluene (8.0‰ to 9.3‰), as well as the largest hydrogen isotope fractionation for MTBE (5.0‰ to 34‰). However, the duplicate experiments at site #1 and site #2 involving hydrogen peroxide stabilized by citrate were more pronounced than the activated and unactivated persulfate experiments in terms of carbon isotope fractionation and exceeded the carbon isotope analytical uncertainty ( 0.5‰) with a range of (2.3 0.5‰ to 4.0 0.5‰), and (1.6 0.5‰ to 2.8 0.5‰) for MTBE and benzene, respectively. Unfortunately, hydrogen isotopes were not analyzed for the hydrogen peroxide experiment due to the lack of sufficient volume of samples. The utilized 2D-CSIA has helped the interpretation of the isotopic changes, especially when the extent of isotopic fractionation for one isotope does not exceed analytical uncertainties, like that observed for benzene in the unactivated persulfate experiment where the changes in carbon isotopic composition were within the analytical uncertainty.

Waleed Gusti (2018). The Effectiveness of Persulfate and Hydrogen Peroxide on the Oxidation of Hydrocarbon Contaminants at 30°C: A Study with Focus on the Performance of Compound Specific Isotope Analysis. UWSpace. http://hdl.handle.net/10012/13460