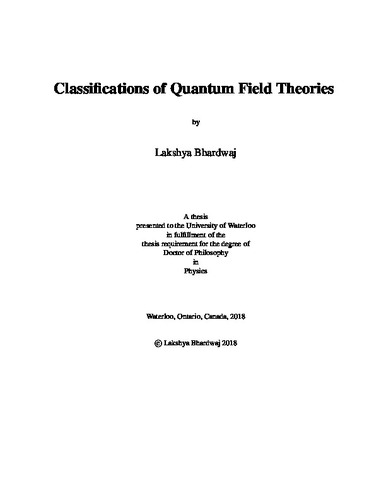 We discuss classifications of UV complete supersymmetric theories in six dimensions, and (spin-)topological field theories admitting a finite global symmetry and possibly time-reversal symmetry in three dimensions. We also discuss a generalization of finite global symmetries and their gauging in two dimensions. First, we start with LSTs which are UV complete non-local 6D theories decoupled from gravity in which there is an intrinsic string scale. We present a systematic approach to the construction of supersymmetric LSTs via the geometric phases of F-theory. Our central result is that all LSTs with more than one tensor multiplet are obtained by a mild extension of 6D superconformal field theories (SCFTs) in which the theory is supplemented by an additional, non-dynamical tensor multiplet, analogous to adding an affine node to an ADE quiver, resulting in a negative semidefinite Dirac pairing. We also show that all 6D SCFTs naturally embed in an LST. Motivated by physical considerations, we show that in geometries where we can verify the presence of two elliptic fibrations, exchanging the roles of these fibrations amounts to T-duality in the 6D theory compactified on a circle. Second, we study the interpretation of O7$_+$-planes in F-theory, mainly in the context of the six dimensional models. In particular, we study how to assign gauge algebras and matter contents to seven-branes and their intersections, and the implication of anomaly cancellation in our construction, generalizing earlier analyses without any O7$_+$-planes. By including O7$_+$-planes we can realize 6d superconformal field theories hitherto unobtainable in F-theory, such as those with hypermultiplets in the symmetric representation of special unitary gauge algebra. We also examine a couple of compact models. These reproduce some famous perturbative models, and in some cases enhance their gauge symmetries non-perturbatively. Third, we argue that it is possible to describe fermionic phases of matter and spin-topological field theories in 2+1d in terms of bosonic "shadow" theories, which are obtained from the original theory by "gauging fermionic parity". The fermionic/spin theories are recovered from their shadow by a process of fermionic anyon condensation: gauging a one-form symmetry generated by quasi-particles with fermionic statistics. We apply the formalism to theories which admit gapped boundary conditions. We obtain Turaev-Viro-like and Levin-Wen-like constructions of fermionic phases of matter. We describe the group structure of fermionic SPT phases protected by the product of fermion parity and internal symmetry G. The quaternion group makes a surprise appearance. Fourth, we generalize two facts about oriented 3d TFTs to the unoriented case. On one hand, it is known that oriented 3d TFTs having a topological boundary condition admit a state-sum construction known as the Turaev-Viro construction. This is related to the string-net construction of fermionic phases of matter. We show how Turaev-Viro construction can be generalized to unoriented 3d TFTs. On the other hand, it is known that the "fermionic" versions of oriented TFTs, known as Spin-TFTs, can be constructed in terms of "shadow" TFTs which are ordinary oriented TFTs with an anomalous $\mathbb{Z}_2$ 1-form symmetry. We generalize this correspondence to Pin$^+$-TFTs by showing that they can be constructed in terms of ordinary unoriented TFTs with anomalous $\mathbb{Z}_2$ 1-form symmetry having a mixed anomaly with time-reversal symmetry. The corresponding Pin$^+$-TFT does not have any anomaly for time-reversal symmetry however and hence it can be unambiguously defined on a non-orientable manifold. In case a Pin$^+$-TFT admits a topological boundary condition, one can combine the above two statements to obtain a Turaev-Viro-like construction of Pin$^+$-TFTs. As an application of these ideas, we construct a large class of Pin$^+$-SPT phases. Finally, we recall that it is well-known that if we gauge a $\mathbb{Z}_n$ symmetry in two dimensions, a dual $\mathbb{Z}_n$ symmetry appears, such that re-gauging this dual $\mathbb{Z}_n$ symmetry leads back to the original theory. We describe how this can be generalized to non-Abelian groups, by enlarging the concept of symmetries from those defined by groups to those defined by unitary fusion categories. We will see that this generalization is also useful when studying what happens when a non-anomalous subgroup of an anomalous finite group is gauged: for example, the gauged theory can have non-Abelian group symmetry even when the original symmetry is an Abelian group. We then discuss the axiomatization of two-dimensional topological quantum field theories whose symmetry is given by a category. We see explicitly that the gauged version is a topological quantum field theory with a new symmetry given by a dual category.