Gauge Models of Topological Phases and Applications to Quantum Gravity 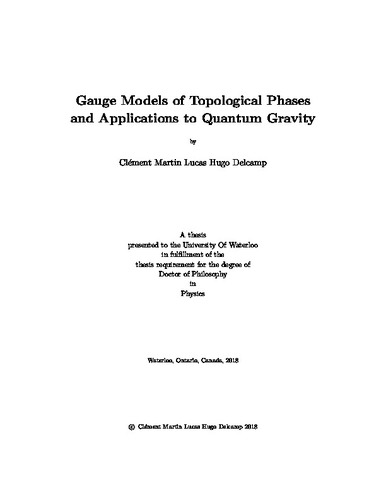 In 2+1 dimensions, gravity is an SU(2) topological gauge theory that can be written as BF theory. In the condensed matter literature, the Hamiltonian realization of BF theory for finite groups is known as the Kitaev model. The corresponding Hamiltonian yields magnetic and electric point-like excitations, both supported by punctures. In this context, the cylinder plays a special role since the gluing of two cylinders results in another cylinder, hence defining an algebra on the Hilbert space of states, referred to as Ocneanu's tube algebra. By choosing specific graph-states on the cylinder, we can confirm explicitly that this algebra is equivalent to the Drinfel'd double of the gauge group. The representation theory of the Drinfel'd double can then be used to define a basis of excited states associated with any punctured Riemann surface. This result can be adapted so as to define a new basis for the gauge invariant Hilbert space of lattice gauge theories, and a fortiori loop quantum gravity, replacing the well-known spin network basis. In doing so, we naturally shift the focus from the underlying lattice to the excitations themselves, this notion of excitations being understood with respect to a given vacuum state, namely the so-called BF vacuum. This basis diagonalizes so-called ribbon operators that provide Dirac observables. Furthermore, it has an inherent hierarchical organization allowing to design states with a multi-scale structure. This turns out to be extremely precious for studying the large scale structure of the theory. It also provides a new notion of subsystems for gauge theories. Being solely based on excitations, this leads to a completely relational way of defining regions. This can be used to define a new notion of entanglement entropy for lattice gauge theories and (2+1)d gravity coupled to point particles. These techniques can also be generalized so as to define excitation bases for (3+1)d gauge models of topological phases. Two approaches are considered in this thesis. The first one consists in generalizing Ocneanu's tube algebra by replacing the cylinder with the manifold obtained by cutting open a three-torus along one direction. This defines an algebraic structure extending the Drinfel'd double that can be used in a similar fashion as in (2+1)d. The other approach relies on Heegaard splittings of three-manifolds which perform a decomposition into handle-bodies along so-called Heegaard surfaces. We use this technique to encode the Hilbert space of flat connections with curvature excitations of a three-manifold into the Hilbert space of flat connections on a 2d Heegaard surface, hence making the results derived in (2+1)d available to the study of the (3+1)d case.