Asylum and the Politics of Irregularization: Refugee Claimants and Toronto’s Everyday Places 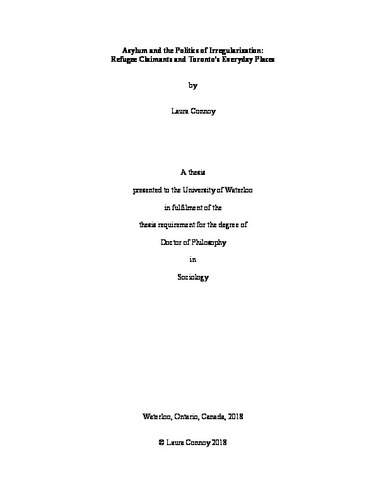 While Canada is touted as having a universal healthcare system, not all of its residents have access to it, particularly precarious status noncitizens such as refugee claimants. As a signatory of international refugee accords, Canada is obligated to ensure that refugee claimants within its borders receive access to healthcare. However, from June 2012 to April 2016, refugee claimants received restricted access to healthcare coverage offered through the Interim Federal Health Program (IFHP). While the underlying goal of this move was to regulate refugee claimants within and outside of the country, it had a major unintended consequence; within everyday healthcare places like hospitals, walk-in clinics, and doctor’s offices, many refugee claimants were denied access to healthcare services regardless of actual levels of coverage. This was due to the relations and encounters between various elements and actors, which produced inconsistent, unpredictable, and contradictory experiences. In this dissertation, I analyze this program and resulting everyday experiences through the lens of irregularization, a regulatory assemblage that problematizes the presence of persons/groups within space and attributes an identity of irregularity, referred to here as an irregular status, that reflects one’s constructed abnormal or problematic presence within space. I build this argument in relation to existing critical migration scholarship, particularly scholarship that engages with borders, (non)citizenship, and humanitarianism. Through these important critical lenses, we are made aware of how identities and subject positions are created and how migrant and refugee populations are regulated locally, nationally, and transnationally. To ground this argument empirically, I provide a policy and discourse analysis of relevant media, position papers, and policy documents to shed light on the tense socio-political context during this time and the everyday workings and implications of irregularization. In addition to this analysis, I also conducted semi-structured interviews in order to highlight the voices of key actors on the ground within the city of Toronto: doctors, lawyers, executive directors, program managers, Ministry officials, City officials, and refugee claimants. This methodology helps to demonstrate how the assemblage of irregularization is constituted and operates, and how borders, (non)citizenship, and humanitarianism can be conceived of as irregularizing assemblages that problematize presence within space, produce insecurity and anxiety, and affects the well-being of refugee claimants in Canada. In addition to a focus on regulation, I also analyze the friction that constitutes the assemblage of irregularization. During this time from 2012 to 2016, the city of Toronto witnessed demonstrations, campaigns, and occupations to draw public attention to the IFHP cuts and the experiences of refugee claimants, in addition to less visible acts that established ‘common’ spaces which prioritize the health of refugee claimants and others present within the city. Drawing on critical citizenship scholarship, I analyze these challenges through the concept of acts of liberating irregularity, being the visible and less visible deeds or conducts that are enacted through solidarity and performativity to assert the presence of refugee claimants and the right to healthcare. While these acts were not necessarily transformative, they were important in addressing the healthcare needs of refugee claimants, and offering a subtle resistance to the irregularizing assemblages of borders, citizenship, and humanitarianism. In this critical analysis of the politics of irregularization, this dissertation contributes to the sociology of migration as it relates to regulation and resistance, and offers a timely and unique analysis of Canada’s refugee healthcare system as defined by the IFHP.