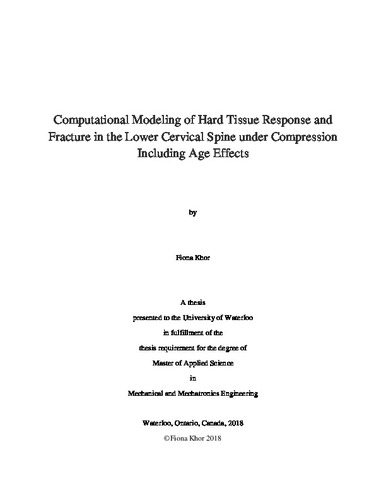 Almost half of motor vehicle accident (MVAs) victims experience traumatic spinal cord injuries (SCI), which are often associated with rollover accidents. Specifically, rollovers have the highest incidence rate of AIS2+ cervical spine injuries and more than half of the patients with SCIs demonstrated spine fractures with the majority being burst fractures. Detailed finite element human body models (HBMs) have been utilized to assess the safety of occupants and pedestrians in crash scenarios, augmenting the results from crash test dummies in physical tests. HBMs can predict the potential for injury and provide data such as fracture initiation and propagation that is not possible to collect experimentally. Biofidelic HBMs capable of predicting tissue-level injury require representative material properties and tissue level failure criteria. However, current HBMs use simplified constitutive models and are not capable of predicting the fracture threshold and fracture pattern for complex scenarios, such as the vertebrae in the neck. The objective of this study was to investigate constitutive models with age effect that are representative of cortical and trabecular hard tissues and assess the failure response of a C57 (C5-C6-C7) segment model under compression loading. Two sets of material properties were identified that corresponded to the lower age of the experimental test samples (younger than 50 years old (YO)) and the higher age of the test samples (older than 70 YO). The available constitutive models in a commercial finite element code (LS-DYNA) were reviewed and the constitutive models that best represent the cortical and trabecular bone responses were analyzed. As there were no single constitutive model available that included all the key properties of hard tissues, asymmetric and anisotropic elastic-plastic (cortical) and crushable foam (trabecular) models were evaluated. Single element simulations were performed to verify the constitutive models. A functional spinal unit (FSU) model was extracted from a detailed 50th percentile HBM (Global Human Body Models Consortium (GHBMC) M50-O v4.3) and a centric compression simulation was performed to identify the best performing constitutive model compared to experimental data. Various eccentricity cases of the compression experiments were simulated as well such as anterior, posterior and lateral. The anisotropic model predicted failure values and fracture patterns in better agreement with experimental data compared to an asymmetric or isotropic and symmetric model. This study showed the importance of including age effects that correspond to the age of experimental test subjects. This study also showed that simulations could provide additional insight regarding fracture initiation and progression, which is challenging to measure in dynamic experiments. Gender, segment level, and strain rate effect were not included in this work, which are limitations of the current study. In addition, the lack of human cervical spine experimental data for improved model validation is another limitation of this study. In conclusion, this study successfully utilized uncalibrated material properties of cortical and trabecular bone tissue from literature and accurately predicted failure outcomes of compression experiments with the implemented constitutive models.