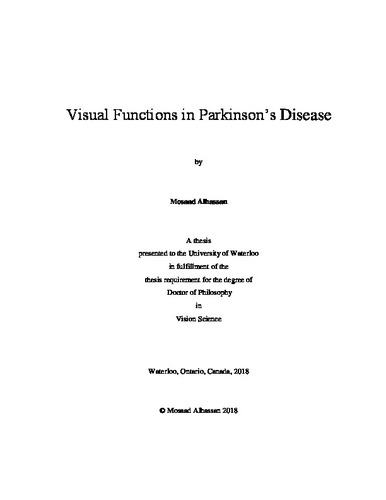 Background: Freezing of gait (FOG) is considered to be a motor disorder symptom that affects some Parkinson Disease (PD) patients; however, it is hypothesized that sensory systems may also be involved in FOG. Purpose: The purpose of this thesis is to measure different 2-dimensional (2-D) and 3-dimensional (3-D) clinical visual functions in FOG and non-FOG PD patients. The ability to maintain adequate alignment of the two eyes was assessed by measuring fixation disparity curve. The other objective of this thesis was to look at integrity of autonomic nervous system (ANS) and two non-motor functions mediated by the cholinergic system in FOG and non-FOG PD patients. FOG PD patients may have greater impairment of one, or more, of these functions. Methods: The 2-D visual function measurements included high and low contrast visual acuities using Early Treatment Diabetic Retinopathy Study charts, low spatial frequency contrast sensitivity using Pelli-Robson chart, horizontal and vertical Vernier acuity using The Freiburg Visual Acuity Test. These tests were conducted under photopic, and then under mesopic conditions. The 3-D visual function measurements included local (contour) and global (random dot) stereopsis at near. Local stereoacuity was measured using Circles and MKH-Haase Line tests. Global stereoacuity was measured using the MKH-Haase Steps, TNO, Randot 3, and Butterfly tests. Fixation disparity curves were measured using the Saladin Near Point Card. Constriction and dilation pupil light reflexes (PLRs) were measured by using a handheld monocular pupillometer to evaluate the integrity of ANS. The inspection time (IT) was determined by a simple length discrimination task to evaluate the integrity of the cholinergic system. Twenty-two FOG PD patients, 25 non-FOG PD patients, and 25 aged matched healthy controls (HC) completed all of the measurements in this project. Results: FOG group had worse 2-D visual resolution results than other two groups especially under the mesopic condition. FOG group also had worse stereopsis than the other two groups. An impairment in global stereopsis was more common than local stereopsis in both PD patient groups. The reduction in stereopsis among PD patients was not associated with the fixation disparity. Both PD patient groups showed significant differences from healthy controls in most of PLR constriction parameters. FOG PD patients showed larger deficits than non-FOG PD patients in some of the constriction parameters. Both groups of PD patients had longer dilation latencies than healthy controls. FOG PD patients had slower IT scores than healthy controls. IT scores for the non-FOG PD patients fell in between the FOG and HC results. Conclusions: FOG patients have a greater impairment in both 2-D and 3-D visual functions. Whether these impairments are contributing to the FOG or just associated with FOG is uncertain. FOG patients also had larger impairments in non-dopaminergic mediated functions such as PLRs and IT, which suggests that FOG patients have greater impairment in two functions that involve cholinergic neurotransmitters.