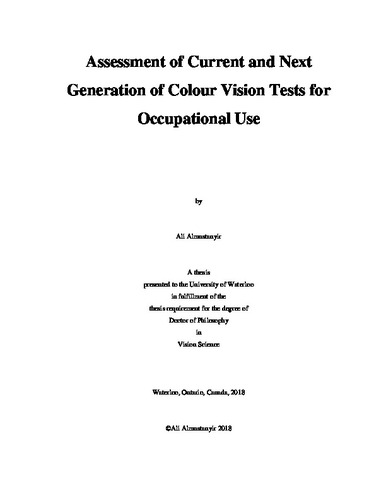 Introduction: Individuals with congenital colour vision deficiencies are at a greater risk of making an error in colour judgment. Computerized colour vision tests are now available to screen for colour vision defects and quantify the severity of their defect. Purposes: The first experiment compared chromatic thresholds measured on different computerized colour vision tests for colour-normals (CVN) and colour vision defective (CVD) using a common scale. The next experiment evaluated whether dichromatic transformations of the Farnsworth D15 (F-D15) and the ColorDx D15 colors could predict the actual arrangements. The third study evaluated the within-session and between visits repeatability of each of the D15 tests. The last studies determined which one of the newer computer-based tests would replace the Holmes-Wright Type A Lantern (HWA), F-D15 and the CN Lantern. Lastly, the results of a short survey of how a colour vision deficiency affected their lives are presented. Methods: Sixty CVN subjects and 68 CVDs were tested with the Oculus HMC anomaloscope, Psuedoisochromatic tests (the Ishihara, Hardy, Rand, Rittler (4th ed), ColorDx PIP), computrized tests (CAD, Rabin Cone Contrast Test (RCCT), Cambridge Colour Vision Test (CCT), Landolt C Cone Contrast (LandC)), Lantern tests (HWA, CN Lantern), and arrangment tests (F-D15, ColorDx D15). Results: Discrimination ellipses measured in the CIE colour space with the CAD were significantly larger than the ellipse areas measured by CCT for CVNs, protans and deutans. For the tests that measure vector length, there were significant interactions between the three tests and the different subject groups. In general, the dichromatic transformation of the D15 tests provided reasonable predictions of the actual dichromatic arrangements. Both D15 tests studied showed that each test was highly repeatable within and between sessions. As expected, the ColorDx D15 had the highest level of agreement with the F-15, although it was not as challenging as the F-15. The LandC and CAD had significantly higher levels of agreement with the HWA compared with the other tests. Nearly all the CVD failed the CN Lantern test at 4.6m, but the number of errors decreased and the pass rate increased as the viewing distances of the CN lantern was shortened. At the 2.3 m distance, the agreement values for the HRR, ColorDx, and CAD were similar and considered as good. These agreement values decreased as the viewing distance decreased further. The results of the survey study showed that the percentage of dichromats who reported difficulties with colours was more than double of the percentage of anomalous trichromats, but lower than reported by other surveys. Conclusions: The difference between the CAD and CCT colour discrimination ellipses was likely a result of the different number and spacing of the chromatic vectors that were sampled in each program. The differences between the three tests that measured the vector length could be due to the luminance masking noise, monitor artifacts, different angular sizes, and psychophysiological procedures. The RCCT and LandC tests did not show a potential ceiling effect in estimating CVD thresholds, however, the LandC was preferred over the RCCT because it can measure chromatic threshold for CVN. The dichromatic predictions of the D15 tests suggest that this model may be useful in predicting the performance of dichromats on other colour-related tasks. The decrease in errors on the CN Lantern was likely due to the increase in brightness of the test lights with decreasing test distance. Although everyone with a colour vision defect will likely to fail the CN Lantern at 4.6 m, individuals who fail either version of the D15 will almost certainly fail the CN Lantern at 4.6 and 2.3m. A mild classification on the HRR and ColorDx PIP provides a reasonable prediction of who will pass the CN lantern at the shorter distances.

Ali Almustanyir (2018). Assessment of Current and Next Generation of Colour Vision Tests for Occupational Use. UWSpace. http://hdl.handle.net/10012/13417