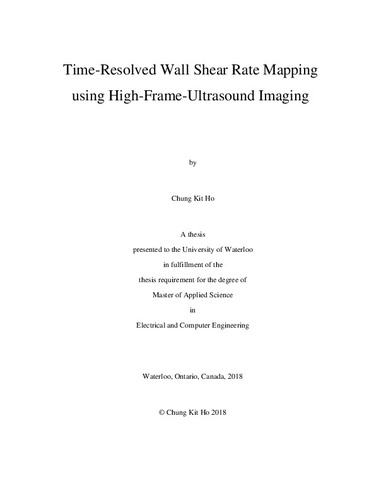 Arterial wall shear rate is known to be strongly associated with plaque formation and stroke risk. As a non-invasive, point-of-care imaging modality, ultrasound has been applied to perform wall shear rate (WSR) measurements. However, the existing ultrasound-based solutions fall short of providing sufficient diagnostic information in both spatial and temporal dimensions while remaining non-invasive. To date, quantitatively tracking WSR dynamics over multiple vessel wall positions has yet to be demonstrated. In this work, we propose a new non-invasive WSR mapping technique that makes use of high-frame-rate ultrasound principles to dynamically track the spatiotemporal evolution of WSR in an artery segment. The proposed new WSR mapping method is built on two key principles: high-frame-rate-flow vector estimation and velocity gradient estimation via a two-dimensional spatial derivative. In brief, after high-frame-rate ultrasound data using plane wave excitation, a set of flow vector maps was generated using a multi-angle vector Doppler estimation. Next, the flow vector maps were regularized using a penalized least-squares method. After that, a Sobel filter was used to derive the spatial velocity gradients of the vector map. Finally, the WSR was computed by finding the tangential components of the velocity gradient tensors at the vessel wall positions. Two studies were carried out to investigate the performance of the proposed WSR measurement method. First, a Hele-Shaw flow chamber that can generate a linear WSR field was designed and constructed to evaluate the accuracy of the wall shear rate estimation. Second, two carotid bifurcation models (healthy and 50% stenosed) were built to demonstrate the ability of the framework to quantify and visualize spatiotemporal WSR patterns in complex flow dynamics. Results from the first study indicate that the proposed estimation algorithm can provide consistent WSR estimates. Findings from the second study suggest that our proposed framework is capable of profiling space-time varying WSR dynamics, which could provide new insights into atherosclerosis diagnostics.