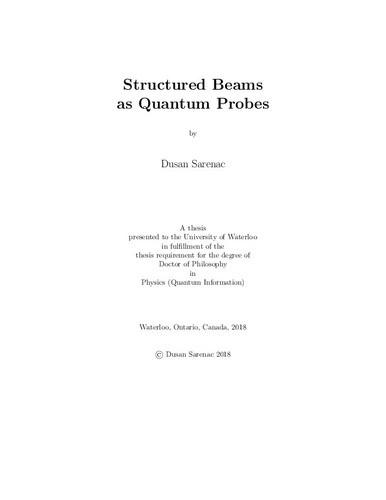 This thesis describes several projects under the common theme of generating and manipulating the spatial quantum phase structure of matter and electromagnetic waves. Experiments dealing with the following topics are addressed: perfect crystal neutron interferometry, far-field phase-grating moire interferometry, orbital angular momentum (OAM), spin-orbit states, and lattices of spin-orbit states. The first focus of the thesis is describing the work related to the construction of a new beamline dedicated to quantum information related neutron interferometry experiments at the National Institute of Standards and Technology's Center for Neutron Research. This includes the development of the necessary environmental isolation, phase stability, and temperature isolation mechanisms; and the installation and optimization of spin polarization elements. The new beamline is now operational and it is currently one of only three neutron interferometry facilities in the world. The second focus of the thesis is to describe the development and characterization of far-field phase-grating moire neutron interferometry. This technique enables studies that are complimentary to those of perfect crystal neutron interferometry experiments. It may be used to probe structured materials and characterize neutron interactions with potential gradients. A two phase-grating moire neutron interferometer was developed, characterized, and optimized. This setup was then employed to probe the microstructure of a monodisperse suspension of 2 um diameter polystyrene spheres. Furthermore, a three phase-grating moire neutron interferometer was developed and characterized. This unique setup promises a wide range of impactful experiments from far-field imaging of material substructure to fundamental physics. The third focus of the thesis is to describe neutron OAM. These experiments revolve around the preparation and characterization of an azimuthally varying phase profile. The demonstration of neutron OAM using a perfect crystal neutron interferometer is described, where a spiral phase plate was used to induce OAM in one of the paths of the interferometer. Furthermore, a modified setup was used to perform neutron holography of a macroscopic object which induces an azimuthally varying phase profile. These methods provide a new tool for interferometric testing of neutron optics and the characterization of coherence of neutron beams. The last focus of the thesis is to describe matter wave and optical spin correlated OAM (spin-orbit) states. Methods to prepare neutron spin-orbit states via special geometries of magnetic fields are proposed. The preparation, entanglement characterization, and proposed experimental verification of such states are described in detail. Furthermore, a method which is capable of preparing lattices of optical and neutron spin-orbit states is introduced and described. This method utilizes novel optical and neutron devices and it is based on coherent averaging and spatial control methods borrowed from nuclear magnetic resonance. The experimental preparation and characterization of optical lattices of spin-orbit states is described in detail.