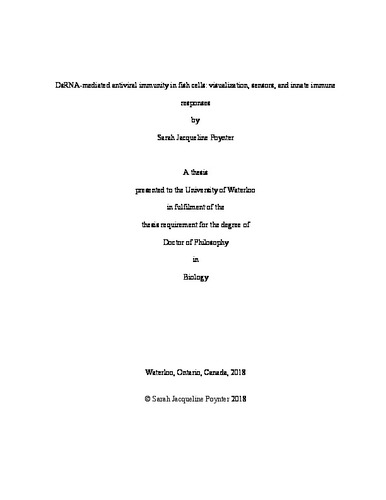 The global aquaculture industry is a multibillion dollar business that is threatened by pathogens, including a wide array of aquatic viruses. Currently there are no antiviral treatments available to combat viral outbreaks, and as such viral infection can cause vast economic loss. Two important species for aquaculture include rainbow trout (Oncorhynchus mykiss), destined for human consumption, and fathead minnow (Pimephales promelas), a common species grown for bait purposes. Double-stranded (ds)RNA is a potent immunomodulating molecule produced during viral replication; dsRNA treatment induces a robust antiviral state that makes host cells refractive to viral replication. This thesis explored dsRNA-induced innate antiviral pathways from two angles. Firstly, the differences in dsRNA-induced responses between virally-produced dsRNA, synthesized dsRNA with natural sequence variation, and synthesized dsRNA with a homogenous sequence were analyzed in rainbow trout cells. The dsRNA, regardless of source, was sensed at the cell surface by a common receptor in rainbow trout cells and induced an innate immune response and antiviral state against two aquatic viruses, viral hemorrhagic septicemia virus and infectious pancreatic necrosis virus; the virally-produced and lab-synthesized dsRNA molecules with natural sequence variation produced the most similar responses. The second angle of approach was to better understand the host’s response to exogenous dsRNA treatment. To this end, novel dsRNA sensors were identified and characterized in rainbow trout. This included class A scavenger receptors, the purported surface receptors for dsRNA, including MARCO, SCARA3, SCARA4, and SCARA5, as well as two novel cytoplasmic dsRNA sensors from the DExH/D-box family, DDX3 and DHX9. The receptors found in rainbow trout contained the same conserved domains that are found in their mammalian counterparts, a first indication of conserved functionality. Two MARCO variants were identified and found to bind to two gram-negative and one gram–positive bacteria, but surprisingly not to dsRNA. Rainbow trout DDX3 and DHX9 are both functional in their ability to bind to dsRNA. The culmination of these findings was the development of a dsRNA molecule with sequence variation that can act as a potent antiviral therapy in vitro in fathead minnow cells. The findings from this thesis demonstrate the importance of ‘natural’ dsRNA as an innate immune signalling molecule and its potential to function as a prophylactic antiviral therapeutic for fish.