Understanding University Students’ Intercity Transport Mode Choice: A Case Study of the University of Waterloo Students’ Travel Behavior Between the Region of Waterloo and the Greater Toronto and Hamilton Area 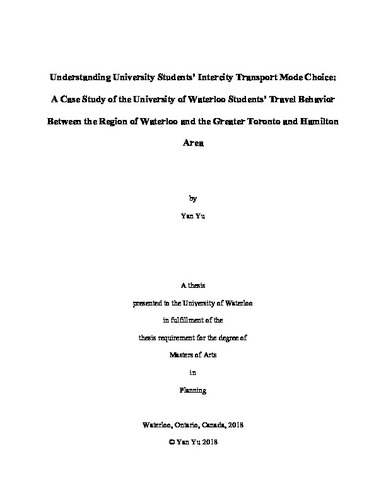 The ongoing population growth is an essential driver to support the Greater Golden Horseshoe (GGH)’s long-term economic development and competitiveness, but it could also create substantial issues and challenges on the region’s transportation system. The Ontario provincial government, as well as the municipal governments in the GGH, have been aware of the current high level of automobile dependency and its negative consequences on the region’s socioeconomic development. Several collaborative initiatives have been being taken to diversify the existing transportation system and encourage the use of transit and active modes of transportation. This research aims to understand what are the factors that affect University of Waterloo students’ intercity mode choice, and the significance levels of the identified influencing factors on their intercity mode choice between automobile modes (driving, carpooling, Uber and taxi) and non-automobile modes (bus and train). It also investigated the students’ attitudes towards the proposed high-speed rail in Ontario and their intended behavior of using it when traveling between the Region of Waterloo and the Greater Toronto and Hamilton Area (GTHA). The results revealed that the students’ intercity mode choice behavior varies according to their trip frequencies and their primary destinations in the GTHA, and whether or not having the Presto card and motor vehicle availability are the two most influential factors at the 1% significance level on their intercity mode choice. Moreover, the study also found the students have overall positive attitudes towards the high-speed rail in Ontario. Several recommendations were subsequently proposed based on the research findings, which focus on increasing the non-automobile mode share in the intercity travels and adequately engaging the university population in the planning process of the HSR project.