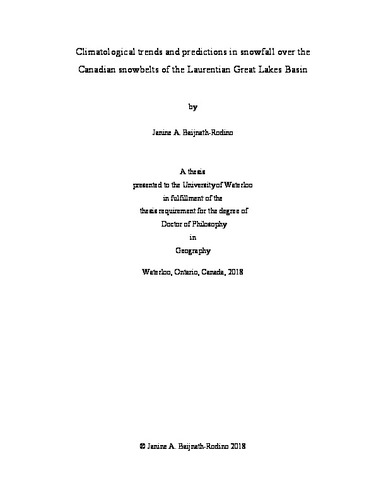 The leeward shores of the Laurentian Great Lakes are highly susceptible to lake-induced snowfall that is either driven by extratropical cyclones or lake effect processes. During the late autumn and winter season, cold air advection over relatively warm lakes induces instability in the lower planetary boundary layer (PBL). This process facilitates the exchange of moisture and energy fluxes and fuels the development of snowfall. In addition, the large thermal capacity of the lakes can enhance existing precipitation that is associated with frontal boundaries moving over the Great Lakes Basin (GLB). Lake-induced snowfall can produce whiteout snowsqualls and heavy snowfall accumulations in highly localized areas, which can affect residential, agricultural, economic, and recreational sectors within the GLB. Therefore, the dangerous impacts of lake-induced snowfall on snowbelt communities warrant the need for improved spatiotemporal investigations in observed and predicted snowfall. Despite many snowfall studies, three gaps have been identified. The first gap suggests that minimal snowfall research has been conducted for the Ontario snowbelts of Lake Superior and Lake Huron-Georgian Bay (hereinafter referred to as Lake Huron). The second gap identifies that there has been limited investigations conducted on climatological trends in snowfall and LES predictor variables. The third gap suggests that most lake-induced snowfall studies have employed coarse global climate models (GCMs) and regional climate models (RCMs) at spatial resolutions that make it difficult to delineate meso-beta scale LES snow bands. Thus, the objective of this study is to conduct historical spatiotemporal trends in snowfall and LES predictor variables, and to examine the predictive performance of a RCM in capturing LES events for the under-studied regions of the Canadian Laurentian Great Lakes’ snowbelts. Manuscript 1 investigated 1980-2015 spatiotemporal trends in monthly total snowfall and total precipitation over the GLB using the Daymet (Version 3), hereinafter referred to as Daymet, gridded dataset. Results showed a significant decrease in snowfall (at the 95% confidence level), at a rate of 40 cm/36yrs, and a significant decrease in total precipitation of 20 mm/36yrs, along the Ontario snowbelts of Lake Superior and partially along that of Lake Huron. Attributions to these negative spatiotemporal trends are explored using data from the North American Regional Reanalysis (NARR) and the Canadian Ice Service (CIS). Predictor variables showed significant warming in lake surface temperature (LST) at a rate of over 6 °K/36yrs for Lake Superior; significant decrease in ice cover fraction for both lakes; and an increase in the vertical temperature gradient (VTG). While the resultant trends of these variables are believed to enhance snowfall in these regions, through increased evaporation into the lower PBL, there are other complex processes involved, such as inefficient moisture recycling and increased moisture storage in warmer air masses that inhibit the rapid production of precipitation. Following the identification of trends in monthly snowfall totals, the second manuscript explored whether historical spatiotemporal trends in monthly snowfall extremes were also changing. Manuscript 2 assessed the intensity, frequency, and duration of snowfall within Ontario’s GLB. Monthly spatiotemporal snowfall and total precipitation trends were computed for the 1980-2015 period using Daymet. Results showed that extreme snowfall intensity, frequency, and duration have significantly decreased, at the 90% confidence level, predominantly in December and January along Lake Superior’s snowbelt. Intensity has decreased at a rate of approximately 6 cm/36yrs and 2 cm/36yrs for December and January, respectively. The frequency in extreme snowfall events has decreased by 5 days/36yrs. Furthermore, the number of consecutive days of extreme snowfall events have decreased at a rate of 1 day/36yrs. The Canadian snowbelts of Lake Superior and Lake Huron exhibited different spatiotemporal patterns, and even within a particular snowbelt region, trends in extreme snowfall are not spatially coherent. Discussions into the local and large-scale surface-atmosphere variables that influence these spatiotemporal trends were presented. Finally, in order to investigate future trends in snowfall over the GLB, reliable high resolution RCMs are required to accurately predict historical LES events. Thus, Manuscript 3 conducted validation testing on the high resolution, 0.11° (12 km), Canadian Regional Climate Model Version 5 (CRCM5), interactively coupled to the one-dimensional Freshwater Lake model (FLake). Predictions of snow water equivalent (SWE) and precipitation along the Canadian snowbelts of Lake Superior and Lake Huron during the months of December and January were tested for the period 1995-2014. This study assessed the model’s performance in predicting the timing, location, and precipitation accumulation of specific lake-induced events during a high (2013-2014) and a low (20112012) ice season. Findings showed that December SWE had a negative mean bias difference (MBD) ≤ -10 mm along both snowbelts, with values ≤ -30 mm in January. Similarly, December precipitation showed MBD ≤ -5 mm and January’s precipitation MBD ≤ -10 mm for both snowbelts. Comparison of lake-induced precipitation events also showed that the model mostly under-predicts the daily accumulated precipitation associated with each event but tends to accurately capture the timing and the general location of the snowsqualls along the snowbelts, though not for highly localized snow bands. The findings gained from this thesis, through exploring historical spatiotemporal snowfall trends and RCM validation analyses, are essential for sustainability and adaptation studies.

Janine Baijnath-Rodino (2018). Climatological trends and predictions in snowfall over the Canadian snowbelts of the Laurentian Great Lakes Basin. UWSpace. http://hdl.handle.net/10012/13397